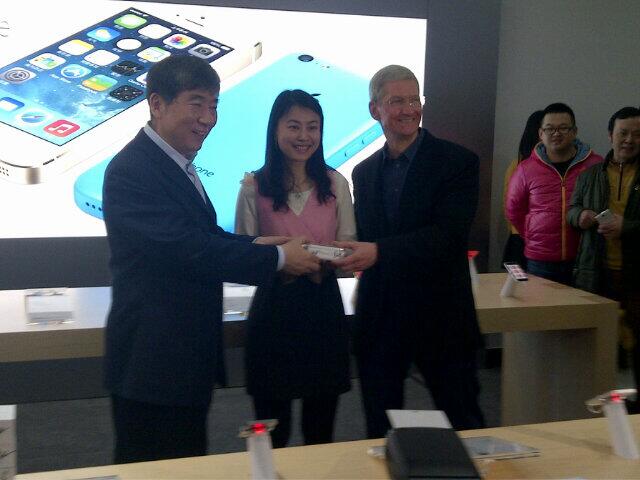 China Mobile‘s highly anticipated iPhone launch is now in full swing over in Beijing. After years of failed negotiations, Apple finally inked a deal with the carrier last month, giving it access to the worlds-largest subscriber base of 750+ million people.

We’ve been talking about the importance of this partnership for months now, but for those that needed a reminder, Tim Cook showed up in person at this morning’s launch. The CEO took photos, signed autographs and even answered a few questions…

Having fun in Beijing at the iPhone launch with China Mobile! pic.twitter.com/AqoqLbbeO7

“Today is just the beginning of China Mobile and Apple coming together to deliver the best experience in the world,” Cook said as a few dozen people came in to look at the iPhones on display. China Mobile said Jan. 15 it signed a multiyear agreement with Apple containing “broad potential” for future cooperation.”

Cook also fielded a few questions from the crowd, and a particular interesting one came up about Apple’s plans to offer a larger iPhone—a popular topic in the rumor mill these days. Obviously he didn’t answer the inquiry directly, but he didn’t say no either.

“We never talk about future things. We have great things we are working on but we want to keep them secret. That way you will be so much happier when you see it.”

The executive has been making similar comments for months now, suggesting that 2014 will be a big year for Apple. This of course has led to speculation that the Cupertino company is working on major product refreshes, completely new products, or both.

But back to China Mobile. All eyes will be on the carrier this weekend, and over the coming weeks, to see what kind of fruit its new partnership with Apple will bear. Apple also has a lot riding on this, as it currently ranks 5th in China’s smartphone market.

There’s no word yet on how well the launch is going, but China Mobile Chairman Xi Guohua said earlier this week that their total number of iPhone orders was in the ‘multi-millions.’