If you’ve been watching the rumor mill over the last 6 months or so, you know that 2014 is expected to be huge for Apple. It’s believed that both the iPhone and iPad will receive larger displays this year, and the highly anticipated iWatch could drop as early as this fall.

The highly-regarded NPD DisplaySearch added to the speculation this morning, issuing a new research note saying that its supply chain sources are tracking new display sizes with various resolutions in development that could be used in some of Apple’s new devices…

Here’s the breakdown of the new display sizes and resolutions (via MacRumors): 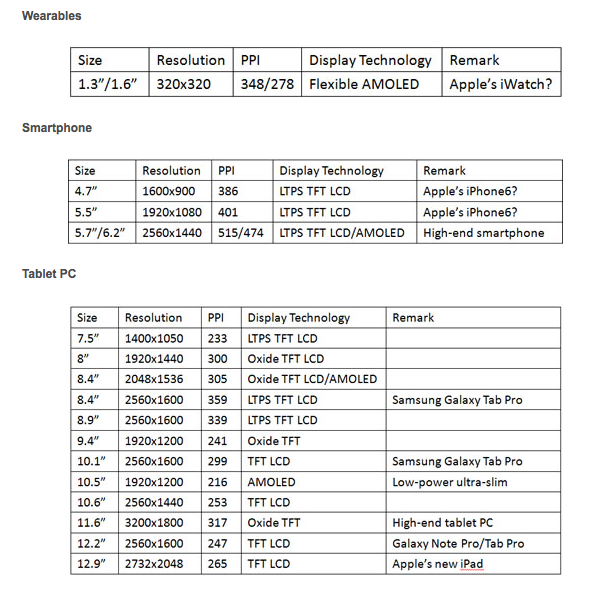 Interestingly enough, a few of these displays match up with persistent rumors on upcoming Apple devices. For example, we’ve heard a few times now that the iWatch could come in two sizes, 1.3″ and 1.6″, using Flexible AMOLED technology, and such displays are in development.

Also note that in the smartphone category, DisplaySearch marks two different panels as potential ‘iPhone 6’ displays. That again is consistent with what we’ve been hearing up until now, as multiple reports have claimed that Apple is working on two larger iPhones at 5.5″ and 5.7″.

And finally there’s the 12.9-inch iPad, which has also frequently popped up in speculation over the past 6 months. Many pundits believe that Apple is preparing a larger, high-performance tablet for the ‘Pro’ market, and this 12.9″ 2732 x 2048 panel would certainly fit the bill.

Of course, it’s very possible that none of this is correct and Apple is just going to release the usual iterative product updates this fall. But the way things are lining up right now suggests that it’s also possible we could see the company make some major changes to its lineup this year.