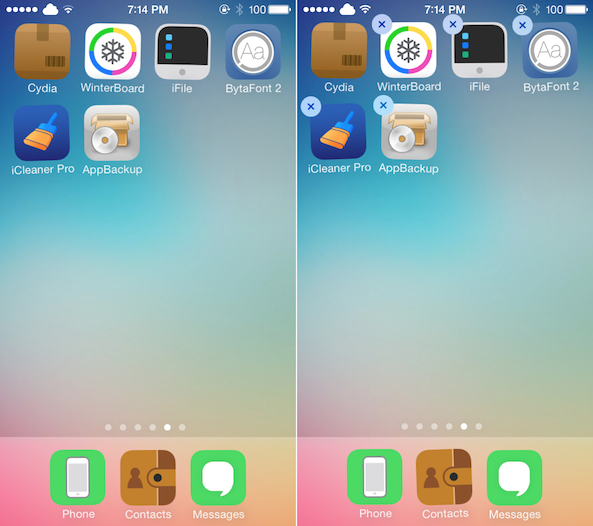 When you tap and hold on an app icon on your Home screen, wiggle mode is enabled and applications can then be deleted. That functionality doesn’t extend to jailbreak tweaks, however, meaning that you have to go into Cydia to uninstall packages by default. To solve that minor inconvenience, developer Ryan Burke has gone ahead and updated CyDelete — originally by Dustin Howett — with both iOS 7 and A7 support…

As you might expect, the all-new CyDelete7 allows iPhone, iPad and iPod touch users to uninstall Cydia apps from the Home screen directly. So if you have a tweak or package installed that has been causing problems, or you no longer need, simply hold your finger on its icon and tap the tiny X in the top left to remove it. Tweaks that don’t have a Home screen icon, such as Zeppelin and Bigify, still require removal through Cydia.

CyDelete7 is free on the BigBoss repository. Give it a try and let us know how you fare.

For those wondering, this is the theme used in the screenshots.