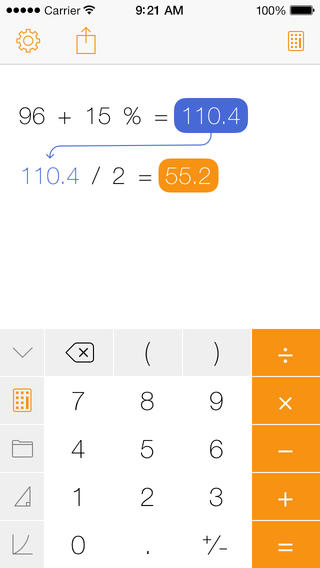 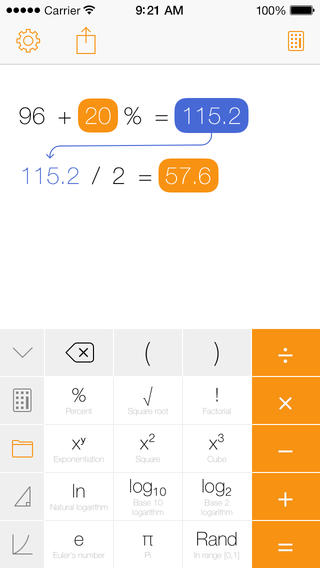 Apple’s stock Calculator app hasn’t changed much since the iPhone’s inception, except for a light new interface introduced as part of the overall iOS 7 makeover.

It gets the job done, for the most part, and is good enough for average users who just need to perform simple on the go calculations every now and then. On the downside, Apple’s inexplicably refused to make its Calculator app available on the iPad.

Worse, the company’s refrained from implementing new features to make complex math or stringing calculations together easier. Enter Tydlig by Andreas Karlsson, a beautiful free-form calculator app for the iPhone and iPad which debuted earlier this month.

Not only is Tydlig a fine piece of software that reminds us what the stock app should have been, it actually tries to re-imagine what a mobile calculator app designed for touch interfaces should be like.

Why do most iOS calculators look like someone taped an old plastic calculator to the screen? How come calculator apps still have buttons like MC/MR/M+/M- when there is enough room on modern devices to store all numbers you could ever think of?

Tydlig starts with a clean sheet, then by only adding interface components that truly makes sense on iPhone and iPad it lets you focus on what really matters: your calculations.

Tydlig is perhaps best explained with a video.

But don’t let its good looks fool you, Tydlig includes an array of advanced features and does away with the explicit functions and x/y variables in favor of linked numbers.

This is a nice feature where you select a result and tie any operation to it in order to create a linked number on the line below. As a result, responsive results and any changes to any of the values will cascade down these links. Linked numbers can be easily unlinked at any point by long-pressing the result. 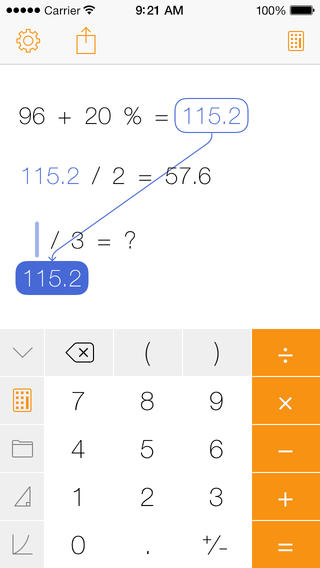 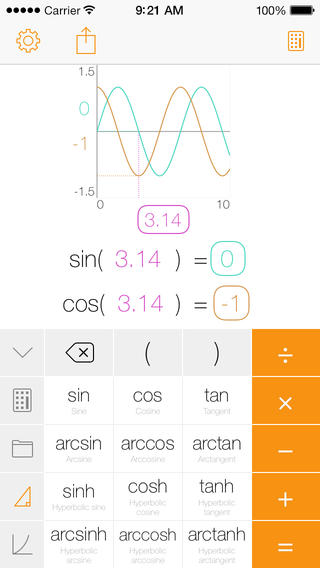 A top 10 utility app in 30 markets, the app supports a handy graphing feature to give those numbers a meaning. The graphing feature relies on the fully editable history, freeform canvas and the constantly updating results.

Karlsson cautions that Tydlig’s linked numbers approach may not strike chord with the traditional types.

Fair enough, if you ask me.

To link a number to the graph, just long-tap the value for your X axis and choose Link with graph. There’s also a slider to adjust the value using the numeric pad (the app supports Bluetooth keyboards and keypads, too). 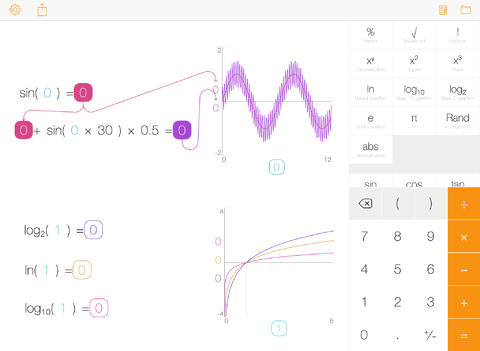 I wasn’t kidding when I said Tydlig does complex calculations! 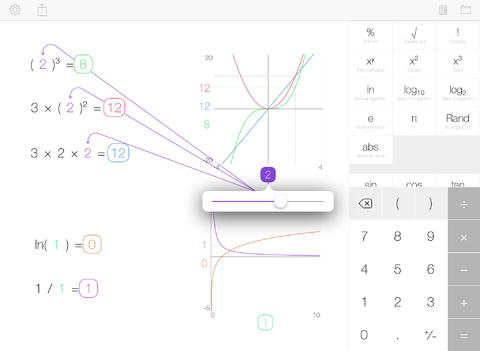 Lastly, if you share your numbers by email, iMessage or Twitter, Tydlig will include a screenshot of the calculation.

• Editable history on a freeform canvas: Tydlig stores all your history on an infinite scrolling canvas. Drag numbers around and arrange them as they make sense to you.
• Responsive results: Edit any number on the canvas and see all affected results update automatically. Let your calculator work for you, not the other way around.
• Linked numbers: With a result selected, press any operation to created a linked number on the line below. You can also drag any result to create a linked number. Responsive results will cascade down these links.
• Familiar numeric pad for input, perfectly sized for your fingers without covering the screen.
• Share your calculations: Copy calculations as text, copy any graph as an image, or by using the share menu which will share a cropped image of all visible calculations.
• Graphing feature: Long press the number you want to make x and choose “Link with graph”. Long press the number under the graph and use the Slider to instantly adjust the value. Perfect when trying to learn how different functions work and feel. Edit the limits by tapping them and using the numpad, like editing any other number.
• Lots of power under the hood with a lightning fast calculation engine and over 20 mathematical functions available.
• Supports external Bluetooth keyboards and numpads for really quick entry.
• Tydlig works completely offline, no need to be connected to the internet.
• Tydlig attempts to innovate by eliminating the need for explicit functions and x/y variables, instead adopting something similar to lambda calculus using linked numbers. This can be effective especially in teaching how functions and graphing works. If you are looking for a way to get into graphing Tydlig might be a good fit for you. If you are looking for a traditional professional graphing solution Tydlig is probably not for you.

Like any new innovative approach to an existing segment of software products, Tydlig will find critics and fans. For my limited use case, I think that Tydlig shows how old ideas can be rethought and improved thanks to new technology – the app’s UI will be particularly interesting in schools for younger kids in my opinion.

Tydlig works well and has a lot of potential – there are several features that could be improved or added without necessarily making the app more complex.

In exchange, you’ll get a beautiful modern-age calculator app that runs natively on any iPhone, iPod touch or iPad device that supports iOS 7 or later.

If you only use calculator occasionally, stick with the stock iOS Calculator instead.

The rest of you who need a versatile calculator should consider Tydlig. I know dropping five bucks on a calculator app sounds insane, but the built-in graphing function, linked numbers and the free-form canvas isn’t something other calculator apps do out-of-the-box so take that into account when making a purchasing decision.