Gene Munster—yes the iTV guy—is out with a new report today looking at the state of Siri’s ability to accurately answer and respond to queries. The Piper Jaffray analyst regularly assesses the accuracy of Apple’s digital assistant.

In his latest look, Munster found that Siri has continued to improve with the release of iOS 7, particularly in its ability to properly interpret questions being asked and its overall performance when accessed in noisier situations…

“The primary improvement between Siri in iOS 6 and iOS 7 came from its performance in noisier areas, where Siri was able to translate better through a noisy environment (94% vs. 83% correct in Aug iOS 6). Based on our testing, iOS 7 Siri’s net ability to answer questions (factors in questions not correctly understood) improved to 79% from 77% in August with iOS 6.”

And here’s his report card for Siri: 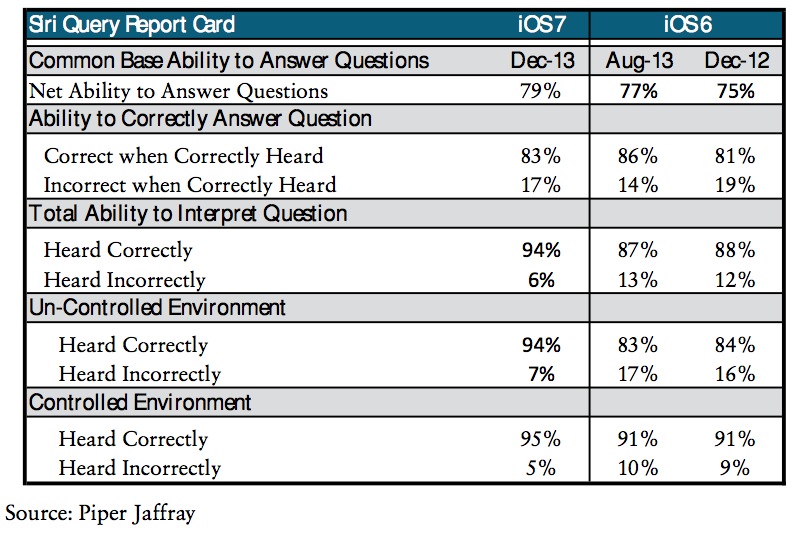 Munster goes on to note that Siri’s ongoing improvements are also benefitting Apple in its efforts to reduce its dependance on Google. In his latest testing, only 4% of Siri’s answers relied on the search giant, compared to 27% last fall.

It would seem that Siri has come a long way from a year ago, when Munster graded the assistant a “D” in search accuracy. He now grades in a C+, and after doing some comparison testing, has ranked it even with Google’s ‘Now’ service.

In September of this year, Apple released iOS 7 to the public with a number of improvements for Siri including a new design, new voice options, and more, but I’d be lying if I said I’ve noticed it being more accurate than it was in iOS 6.