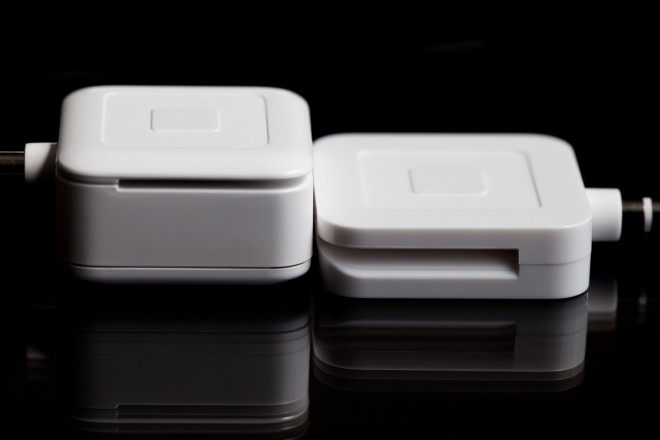 Square unveiled a new version of its Square Reader accessory today, which is used to input credit and debit cards into the Square app. It says the new Reader is roughly 45% thinner than its predecessor, and is more accurate at reading cards thanks to its new design.

But what makes the new device really interesting is who designed it. According to a report from Wired, Square’s new ultra-thin card reader was developed by a team led by Jesse Dorogusker—a former Director of Engineering at Apple and developer of the Lightning plug…

Here’s Wired’s Kyle VanHemert in a profile about designing the new Square Reader:

“Jesse Dorogusker is used to working tiny. Before becoming Square’s VP of Hardware, he spent eight years leading the accessories division at Apple, heading the development of the works-both-ways Lightning connector. With the new Reader, he had the chance to take a crack at a flagship product.”

VanHemert goes on to explain how Dorogusker and his team were able to create the new Reader that was both slimmer and more accurate than beforet. The process is interesting, and actually sounds a lot like what Dorogusker did at Apple with the Lightning connector.

If you’re interested, the new Square Reader can be purchased online and in retail stores beginning in January or you can grab it for free now from Square’s website. And of course you’ll need the corresponding app, Square Register, to use it, which is free from the App Store.

For information on Jesse Dorogusker and the design process behind the new Reader, click here.