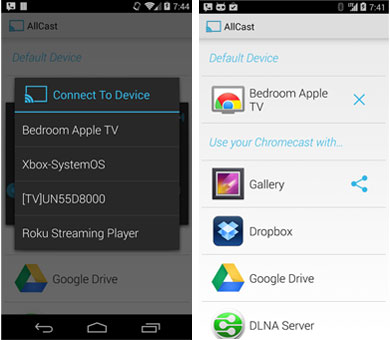 I’m loving my Apple TV and AirPlay, an Apple media technology which streams content from the iPhone, iPod touch, iPad and Mac devices to television sets through the company’s $99 set-top box.

Unfortunately, AirPlay is a proprietary technology that only works with Apple hardware. Don’t you just wish the industry finally settled on a single cross-platform streaming media standard?

That’s the issue a new application for Android devices is attempting to tackle. Created by CyanogenMod developer Koushik Dutta, the AllCast app lets you stream online (Dropbox, Google Drive and so forth) or locally-stored content to your Apple TV, Roku and a number of other set-top boxes and DLNA-compatible devices such as the PlayStation 3 console.

Currently in beta, the software works surprisingly well and I’ve included a video to show it to you right after the break…

It couldn’t be simpler: just choose a video stored locally on your Android device, tap the cast button in the upper right corner and choose your destination device.

A few seconds later, the video will start streaming to a chosen device.

As Engadget notes, there’s currently no support for Google’s $35 Chromecast HDMI dongle or YouTube. The app is compatible with popular online sources such as Google Drive and Dropbox and various media-stremaing devices including the Apple TV, Roku, Xbox 360 and Xbox One, Samsung Smart TV and DLNA renderers.

For those unaware, DLNA content sharing is built into most Samsung devices and there are many DLNA-compatible players and devices out there.

It doesn’t work with the PlayStation 4 because Sony has inexplicably removed DLNA support from its fourth-generation console. AllCast won’t mirror your device’s screen either, it just beams whatever content is currently playing to an output device, wirelessly.

According to Koushik’s post over at Google+, his pet project is currently in beta.

You’ll need to join the ClockworkMod beta testers Google+ group, and then download the latest beta on Google Play. The app does not require your device to be rooted and is free of charge.

A final release is due soon.

This isn’t the first Android app to do AirPlay.

Surprisingly enough, Apple’s never taken a tough stance against non-iOS apps which implement AirPlay, which is a tad weird considering AirPlay streaming as a proprietary technology is not open or even fully documented.