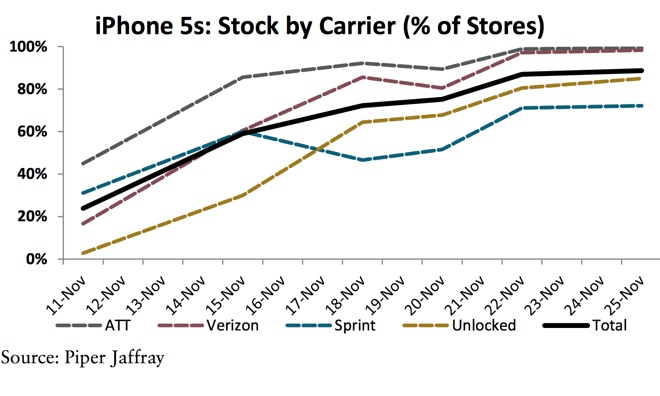 Apple’s flagship iPhone 5s used to be in short supply at both the company’s own and carrier-owned retail outlets in the United States as suppliers struggled to meet high demand for the device. The prime reason affecting the handset’s availability is Apple manufacturing partners’ inability to ramp up production of the sensitive and sophisticated Touch ID fingerprint sensor that no one put inside the Home button before (this is also why the new iPads lack Touch ID).

Indicating improved yields, it would now seem that most of Apple’s U.S. Apple Stores now have the device in stock, with one estimate finding that 90 percent of iPhone 5s models are now available in both Apple and carrier stores…

By comparison, the iPhone 5 accounted for 95 percent of all iPhones in stock last year. Just two weeks ago, Munster found that iPhone 5s availability was a paltry 31 percent, or just ten percent at the start of October.

Apple’s online store lists a ship time of three to five business days for the iPhone 5s, down from two to three weeks earlier this month. Munster said he believes that supply of the 5S will meet demand in early December, mimicking the same route taking by the iPhone 5.

A cool 98 percent of Verizon iPhone 5s models are fully available, which is markedly better than that seen for the iPhone 5 at the same period in 2012. Munster’s poll excludes iPhone 5s units sold by Sprint, the nation’s third-largest carrier, though the numbers show 72 percent of Sprint iPhone 5s units in stock.

AT&T and Verizon combined account for 75 percent of the U.S. wireless market. Apple Stores, according to a new survey from Consumer Intelligence Research Partners, now account for one out of each four iPhones sold in the country.

Munster’s findings come hot on the heels of reports about shipping quotes for both the 16 and 32-gigabyte Wi-Fi model of Apple’s Retina iPad mini having slipped to five to ten business days.

On a related note, availability of the new iPad Air has improved as well: the tablet now ships in five to seven business days versus the previous estimate of seven to ten days.

Who’s getting an iPhone 5s as a holiday gift?