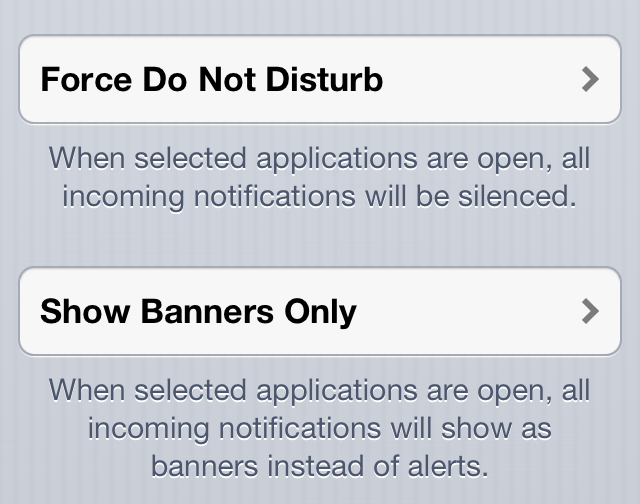 DNDPro is a new jailbreak tweak from dba Technologies. It serves to improve iOS’s native Do Not Disturb capabilities by letting you control notifications while using certain apps.

DNDPro offers more granular control than the stock Do Not Disturb functionality. You can decided to disable all alerts while within a specific app, or only let banner notifications through.

If you like Do Not Disturb, but don’t feel like it caters enough to power users, DNDPro is a tweak that should pique your interest. Have a look inside as we break down its features. 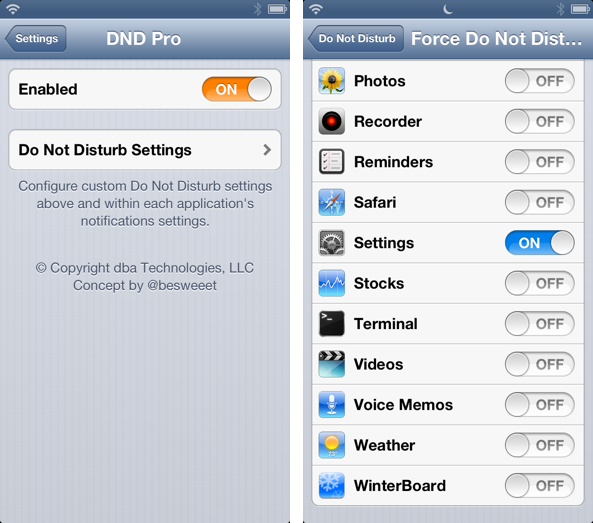 Once installed, DNDPro alters the stock Do Not Disturb settings located in Settings > Notifications > Do Not Disturb. You may also access the new DNDPro settings via its own separate preference panel link, though, the settings are exactly the same as those contained in the stock location. If anything, I think that DNDPro should have omitted its own preference panel, because it will likely confuse users who find the exact same information in two separate locations.

Each of the new settings require users to go in and toggle the specific apps they want to enable. Unfortunately, there are no options to toggle all apps, and there’s no option to suppress notifications while at the Springboard level. These omissions are a bit disappointing. I’m hoping that dba Technologies will update its tweak to include these two features.

DNDPro is available right now via Cydia’s ModMyi repo for $0.99. If you’re looking for more granular control over the stock DND feature found in iOS 6, then you may want to check it out, even though it lacks a couple of features that would really make it live up to its “pro” moniker. Please share your thoughts on the tweak below.