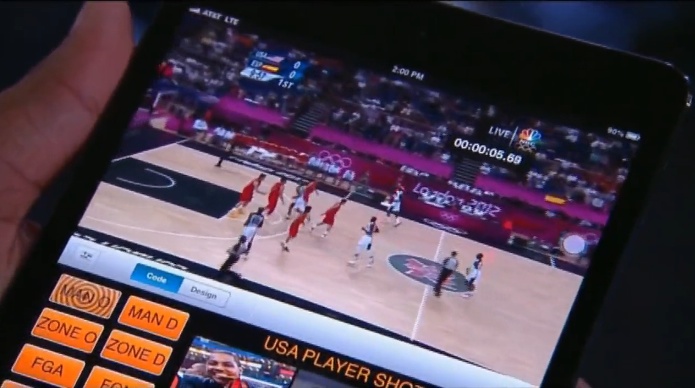 The Wall Street Journal a month ago revealed that Samsung of South Korea signed a lucrative deal with the NBA worth a hundred million bucks to provide its tablets and TVs that referees will use to review close calls. It’s part of the Galaxy maker’s ongoing and massive advertising push which includes big name celebrity endorsements, event sponsorships, sports tie-ins and more.

But despite the partnership which moves Samsung into the valuable space so close to the action, Bloomberg is reporting today that NBA is still very much in love with their iPads and has produced a video explaining how NBA uses Apple’s devices to improve their games. More on that right after the break..

Bloomberg TV sat down with a representative from a company called Sportstec that sells software solutions which allow for quick edits of basketball game footage.

Sportstec’s software is exclusive to iOS devices and is used for post-game analysis. Players and coaches are all given iPads to improve their performance by taking a really close look at close calls to better prepare for upcoming games.

Have a look at the video:

What makes our product demanding is that this is done in real time so coach could come in at the half-time and look at some video edits that were created from the first half and make adjustments.

The software lets players bring up every single possession and includes intricate details like who shot the ball, where everyone else was standing and more. What’s really interesting is that 28 out of the 30 NBA teams (the only holdouts: Pacers and Mavericks) continue to use iPads with Sportstec’s software, Samsung deal be damned.

Samsung probably doesn’t like posts like this given its new NBA exclusive sponsorship. iPads Transforming the NBA http://t.co/DLAyl0I5Ri

Sportstec is providing iPads with its special app to both players and coaches, who claim that this technology helps improve their performance.

As for Samsung, it’s $100 million deal with Samsung is more of a promotional thing rather than technological thing. According to the Journal report, the deal ensures high visibility of Samsung TV sets and tablets during NBA games for the next three years.

The league is also expected to customize video content for Samsung devices, including televisions, where Samsung is trying to set itself apart from rivals by building an ecosystem of unique offerings.

Apple rarely does this types of massive sports deals so don’t expect Tim Cook & Co. to react to Samsung’s NBA move by going in bed with the MLB or NHL, for example.

For what it’s worth, the Samsung deal is a logical extension of its partnership with Miami Heat’s LeBron James who was commissioned to endorse the Galaxy Note II phablet.