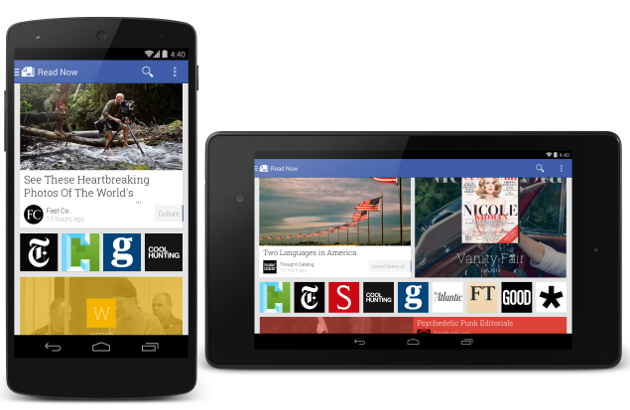 The Internet giant Google today moved closer to consolidating its digital magazine offerings by merging magazines and newspapers along with the Currents app into a new software, known as Google Play Newsstand (seriously?). Google Currents functionality has now been folded into Newsstand, now available for download on Android devices via the Play store.

A spokesperson for the company confirmed that an iOS version is coming in 2014. In addition to subscriptions to digital magazines like Hearst, Conde Nast and Time Warner’s Time Inc. sold through Google Play Magazine, the company has now started selling newspaper subscriptions, with The Wall Street Journal, The New York Times, Financial Times and Los Angeles Times acting as premium launch partners, among other publications.

Apple of course has its own digital store for magazines and newspapers in the stock Newsstand app on iPhone, iPod touch and iPad devices so it’ll be interesting seeing how Google’s latest endeavor plays out in the greater scheme of things…

Transactions are of course handled via Google’s own payment system, though Google Play Newsstand comes with its fair share of teething issues. For instance, Peter Kafka of AllThingsD cautions that digital magazines and newspapers are only available for reading in Google’s app.

If you buy the Times via the app, for instance, you’ll only be able to read the digital paper in Google’s app, and not on the Times’ own Android and iOS apps.

Contrast this to iTunes, where buying a subscription to the Times via other means (i.e. through the web site) makes it available to read within the iOS Newsstand application, thanks to Apple’s tough stance on digital subscriptions offered outside its ecosystem.

In addition to newspapers and magazines, Google Newsstand includes content from blogs you choose to follow such as this one, RSS feeds and other sources. As you’d expect, magazine and newspaper articles automatically reformat themselves for tablet or phone form factor and can include rich multimedia content like images, audio or inline video.

All told, Google Play Newsstand will offer more than 1,900 publications across all sources. It’s also interesting that The Financial Times is a launch partner and yet they refused to sell digital subscriptions via iTunes.

Evidence of Google’s machine learning can be found throughout the app. Each article gets automatically tagged with a single subject — like “skiing,” say or “Android” — and tapping on the tag will open a feed of recent articles on that subject. You can subscribe to tags with a single tap, and everything you’ve subscribed to can be found in a tab within the app called “My News.”

According to Engadget, Google’s Newsstand is coming to iOS devices in 2014.

A spokesperson told us that Newsstand will be coming to Apple’s mobile OS early next year, primarily as a replacement to Currents.

It’s a high time Google replaced the aging Currents iPhone app with something more fashionable as it failed to gain any significant traction and is certainly no Flipboard killer. At any rate, Currents for iOS will remain on the App Store until a version of Newsstand for Apple devices is ready for prime time.

On the flip side, Apple’s policy on subscriptions will pose a major challenge as you likely won’t be able to purchase subscriptions directly through Google’s upcoming iOS app.

Instead, users will have to visit a publication’s website and sign up for a digital subscription there, which will make the editions available on iPhone and iPad devices through the iOS Newsstand app.