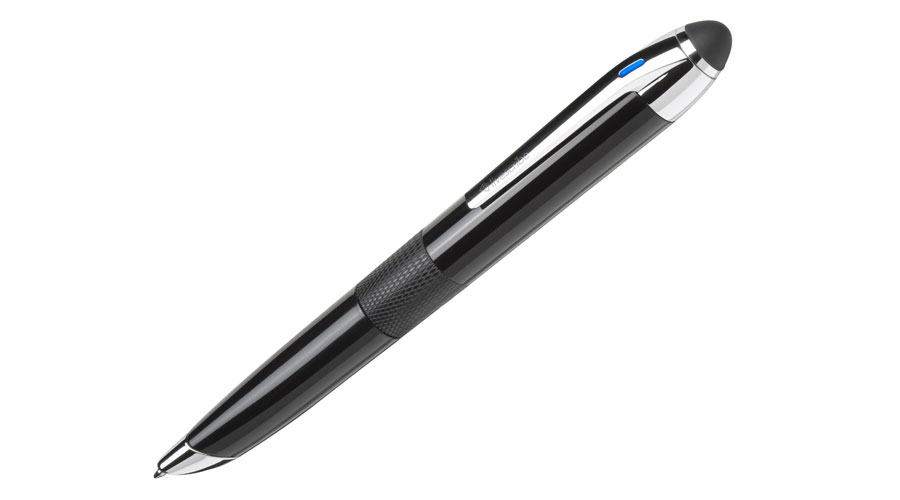 I am not a very good note taker. I tend to focus too much on individual words and phrases instead of quickly jotting down thoughts while listening to a lecture. When I interview someone for an article, I always have a digital recorder of some kind with me because I just know I’ll miss something important in my notes.

The Livescribe Smartpen 3 lets you take notes using a physical pen and paper, while recording audio so that, later, you can playback the clips and listen to specific points in time, just by tapping the word. Maybe even more importantly, the handwritten notes automatically transfer to your iOS device, which is pretty cool, too…

The pen itself is metal and has quite a bit of weight to it, making it feel very sturdy. However, it is balanced well, so it is not top heavy or anything. The body of the pen is black. The trim is chrome. The tip of the pen includes a capacitive stylus tip with a micro USB charger hidden underneath.

The ink cartridge extends and retracts by twisting a ring in the center of the pen. This also turns on the Bluetooth connection so that everything you write will automatically be transmitted to your iOS device.

The included “Dot” paper is a spiral notebook with 50 sheets. However, you can purchase additional packs of paper in different sizes and quantities. Notebooks cost approximately $5 each; depending on how many sheets you want. The Livescribe transfer only works on Dot paper. I tried it on a normal sheet of paper and nothing happened.

The Dot paper also includes some interesting functions that make the whole experience even cooler. At the bottom left corner of each page, there is an illustration of a record, pause, and stop button. Tap the record button on the physical sheet of paper to trigger the recording function. Your iOS device will begin recording audio. At the bottom right corner of each page is an illustration of a star, flag, and tab. Tap one of the icons to add your notes to a new collection of either Favorite, Flagged, or Tagged notes so you can quickly find them in the Livescribe+ app. 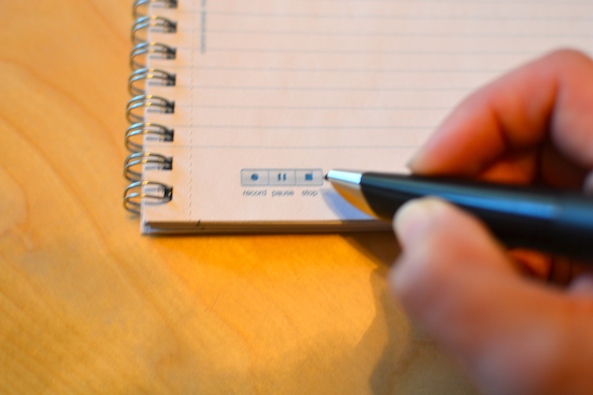 I purposefully didn’t read the instructions before using the Livescribe Smartpen 3. I wanted to see just how easy the setup was. I knew I needed the app in order to make the whole thing work, so I had already downloaded it. I tested the device at my weekly Dungeons and Dragons game night. I pulled out my iPad and the pen and paper. To the rest of the group, it just looked like a normal notebook.

I opened the Livescribe+ app and it prompted me to connect the pen using Bluetooth. I didn’t even have to go to my Settings app. I was prompted to give approval for the pen to connect right after I twisted the center ring to extend the ink pen. A green light blinked at the top of the pen and then turned solid blue when the connection was made. 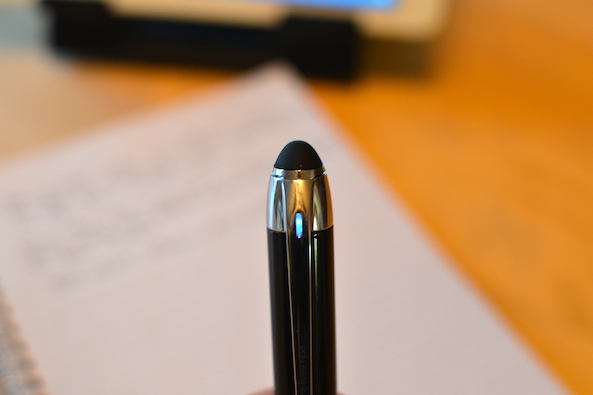 Then, I opened the Dot paper notebook and started writing. As I added words to the page with my ink pen and paper, my chicken scratch handwriting appeared on my iPad. Every letter was transferred to the app within a second of my writing it.

My gaming cohorts started noticing my cool new technology. All adventuring stopped as the tech geeks around me (most of them work for Intel) gawked at what they saw before them. I felt pretty good.

After familiarizing myself with the functions of the pen and paper, I decided to try out the recording function. I tapped the Record button on my Dot paper and, sure enough, the familiar red band appeared on my iPad, showing me that audio was being recorded.

After five minutes, my iPad auto-locked. I continued to take notes for a few more minutes and then opened the app again. The handwritten notes were still there, but the audio had stopped recording. Not only that, but there was no evidence of the recording at all. It was as if it never existed.

I set my iPad’s auto-lock feature to “Never,” and tried again. The audio recorded just fine and didn’t stop until I stopped it. I tested it again with auto-lock enabled and had the same experience as the first time. If you want to record something, be sure to turn off your device’s auto-lock feature or you will lose your recording.

I tested a couple of different scenarios involving having the app running in the background and having the app closed entirely. When you have the app running in the background, your handwritten notes will still transfer to your iOS device. Even if Livescribe+ is off, the notes will sync when you open it. So, you don’t have to bring your iPad with you in order to digitize the notes. As soon as you open the app with the Smartpen 3 on and connected, everything you wrote will sync. However, you will need your iOS device if you want to record audio.

If you recorded audio while taking notes, you can tap on a word and the recording will automatically go to that moment in time when you were taking notes. For example, if your professor was telling you about a definition that will be on an exam and you didn’t quite get all of the information, tap the word you wrote down when he was talking and you will be able to listen to the recording from that moment in time. No more scrubbing, fast-forwarding or rewinding to try to find the section of the lecture you are looking for.

You can also add notes to Favorites, Flagged, or Tagged collections for easy referencing. Just tap on the corresponding icon on the Dot paper and that moment in time will be added to the collections section in the Livescribe+ app.

The Livescribe+ app includes a lot of features that make the Smartpen 3 even better. For example, you can transform you handwritten notes to digital text by swiping from left to right in the “Feed” section. You can turn handwritten notes into Reminders and share them through email, SMS or AirDrop. You can also save your notes in Dropbox, Evernote, GoodReader, iBooks, and other compatible apps. 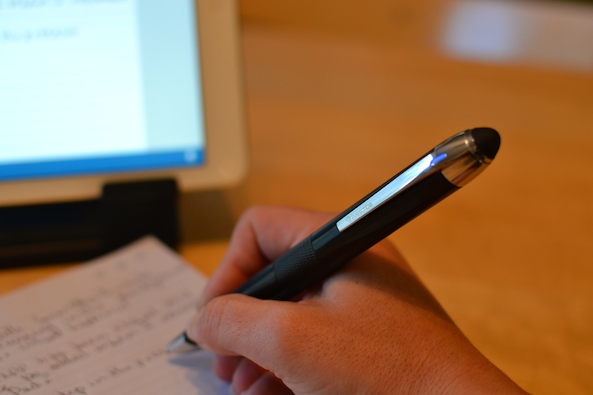 Probably my favorite thing about the Smartpen 3 was how cool everyone thought it was. But, other than my personal ego boost, I love how easy it is to use the pen along with the Dot paper. Everything I wrote down was automatically transferred to my iPad. When I recorded while writing notes, I was able to quickly go back to that point in time and listen to what was being said while I was writing.

What makes this technology better than simply using a note-taking app with a recording function is being able to write with a traditional pen and paper. For people who have spent most of their life using pen and paper to take notes, this combination of old-school note taking and advanced technology is wonderful.

The pen is very big. It is a little less than one inch in circumference. For my tiny little hands, holding a pen that big for an hour (the average length of a lecture) would probably cause cramping.

The Livescribe Smartpen 3 costs $149. It includes the pen, a micro USB charger, the included ink cartridge and a starter notebook with 50 sheets. For $199, you can upgrade to the Pro package, which includes an extra ink cartridge, twice as much paper, and a leather bound portfolio to hold your Dot paper notebook and Smartpen. It might seem like a lot to spend on a pen and paper, but it is very reasonable for the market average. The technology is very new and the Equil Jot, which also costs $149, is the only other pen I know of that offers a similar function.

This pen is awesome and amazing and I love it. That being said, it is not for everyone. It comes at a premium price and you have to use the special Dot paper, which means spending about $5 per notebook. The Livescribe 3 Smartpen is perfect for those in a financially stable situation who take important notes. However, if you are a struggling student who already spends $150 per semester on math books, it might be too expensive. Maybe your parents could get one for you for Christmas. You can order the Livescribe Smartpen 3 from Amazon.

Do you prefer to take notes by typing on a laptop or writing it out the old-fashioned way with pen and paper?