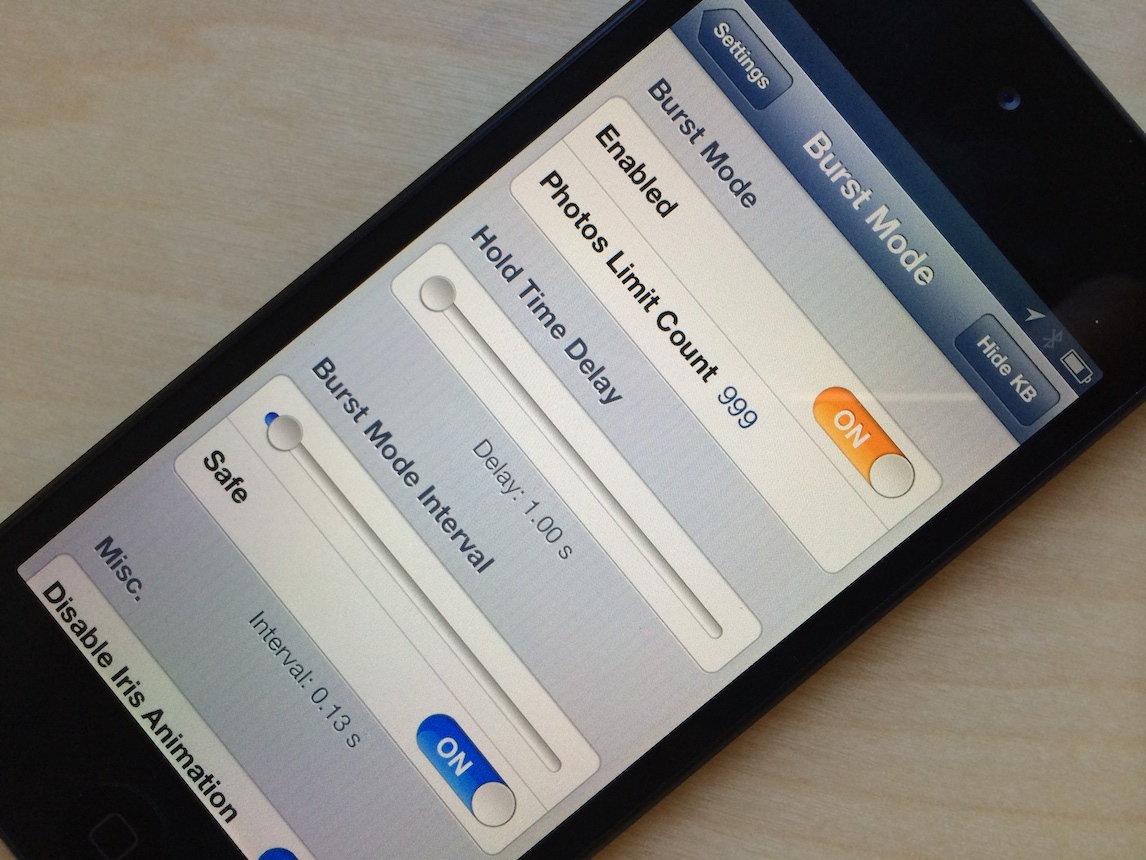 Burst Mode allows you to take as many photos as you want using a simple tap and hold on the shutter button, or a press and hold on your iOS device’s physical volume button. Along with its burst mode capabilities, the tweak features a nice array of bonus features to take advantage of as well. Have a look inside as we look at what makes this free jailbreak tweak tick.

After installing Burst Mode, you’ll want to head over to the stock Settings app in order to configure the tweak. In the settings, you’ll notice a new preference panel dedicated to Burst Mode.

In the tweak’s preferences, there are quite a few options that you can configure to your liking. There’s the obligatory kill switch, which will need to be enabled to use the tweak. There’s also a Photos Limit Count, which defaults at 999.

Unlike iOS 7’s limit, this 999 limit can be changed to suit your needs. In other words, you can insert a custom number that’s much larger than 999 if that’s what you want to do.

The next setting is Hold Time Delay. This setting is the amount of time that a user holds on the camera shutter button before the burst mode photos begin. The delay can be as little as 1 second, up to as many as 3 seconds. I believe a lower delay is better, especially if you want to emulate the style of iOS 7 as closely as you can.

Burst Mode Interval is the next setting up to bat, and like the Hold Time Delay setting, it too features a handy slider for adjusting its time. The lowest interval that can be set is 0.00 seconds, while the highest setting is 6.00 seconds. Obviously, again, lower is better.

Next to the Burst Mode Interval lies an interesting toggle entitled Safe. Safe mode essentially allows you to continuously take photos only if the previous photo has been written to the photo album. Without this enabled, it’s possible that you may face issues with photo capturing, bugs, lag, etc. In other words, this setting should be set to on if you want to guarantee the stability of your device. 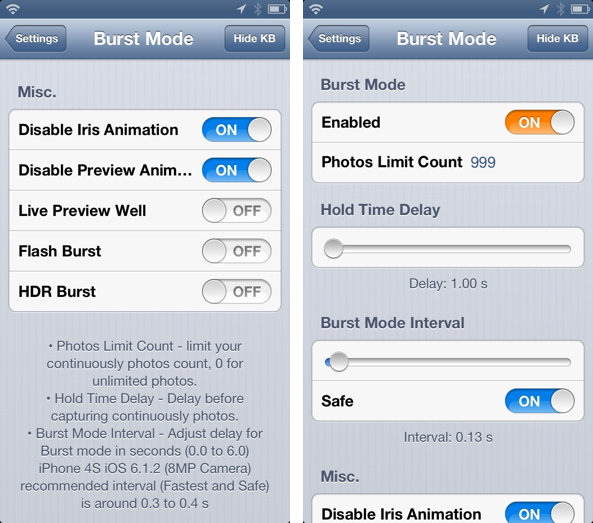 A bunch of miscellaneous settings round out the tweak’s preferences. They are as follows:

I highly recommend that users toggle on the first two options in that group — Disable Iris Animation and Disable Preview Animation. Disabling these will significantly speed up your burst mode photos, and when you consider that the Iris Animation was kicked to the curb in iOS 7 to begin with, it just makes sense to leave that disabled.

Flash Burst and HDR Burst are two self explanatory settings, though I couldn’t test flash because my jailbroken device is an iPod touch 5th generation. It’s probably likely that those two settings will slow you down anyway, so I recommend leaving the first two miscellaneous settings set to on, and the rest set to off.

If you’re still rocking iOS 6, presumably because you want to keep your jailbreak, then Burst Mode is a tweak worth checking out. Not only is it decent in function, but it’s also a free download on Cydia’s BigBoss repo. Let me know what you think about it in the comment section below.