By comparison, the #3 Sprint typically reports  iPhone sales comprising as much as 25 percent of all smartphone sold.

For example, Sprint said it sold 1.4 million iPhones during the third quarter of 2013, 40 percent of which went to new customers, versus the five million total smartphones sold…

The estimate appears to contradict CMO Mike Sievert who said on the call that iPhone sales represented about fifteen percent of T-Mobile-brand smartphone sales, via AllThingsD. Third-quarter revenue was $6.68 billion, up from $6.15 billion a year ago and a modest single percent sequential increase.

Service revenue was $5.14 billion, down from $5.38 billion a year ago. According to T-Mobile’s official numbers, total smartphone sales, including sales to branded prepaid customers, were a record 5.6 million units in the third quarter of 2013, which is equivalent to 88 percent of total units sold, up from 86 percent in the second quarter of 2013.

“This represents a penetration of 78 percent of the total branded customer base, up from 74 percent at the end of the second quarter of 2013,” T-Mobile noted. The company added more than a million net customers, including 648,000 for its primary T-Mobile and MetroPCS brands.

T-Mobile’s Un-carrier approach is resonating with consumers. We added more than 1 million customers and led the industry with 643,000 branded postpaid phone additions because we are fixing the things that drive customers crazy.

Part of our customer momentum comes from the MetroPCS acquisition. With MetroPCS we are making great progress, including the planned additional expansion of the MetroPCS brand into another 15 additional markets by November 21.

T-Mobile said in the call that it added more phone customers than the rest of the industry combined.

“We’re not done yet” changing the “the “stupid, arrogant” industry with our Un-carrier moves, Legere told investors. He also said 2.2 million people have signed up for T-Mobile’s $10-per-month Jump device insurance/early upgrade service. 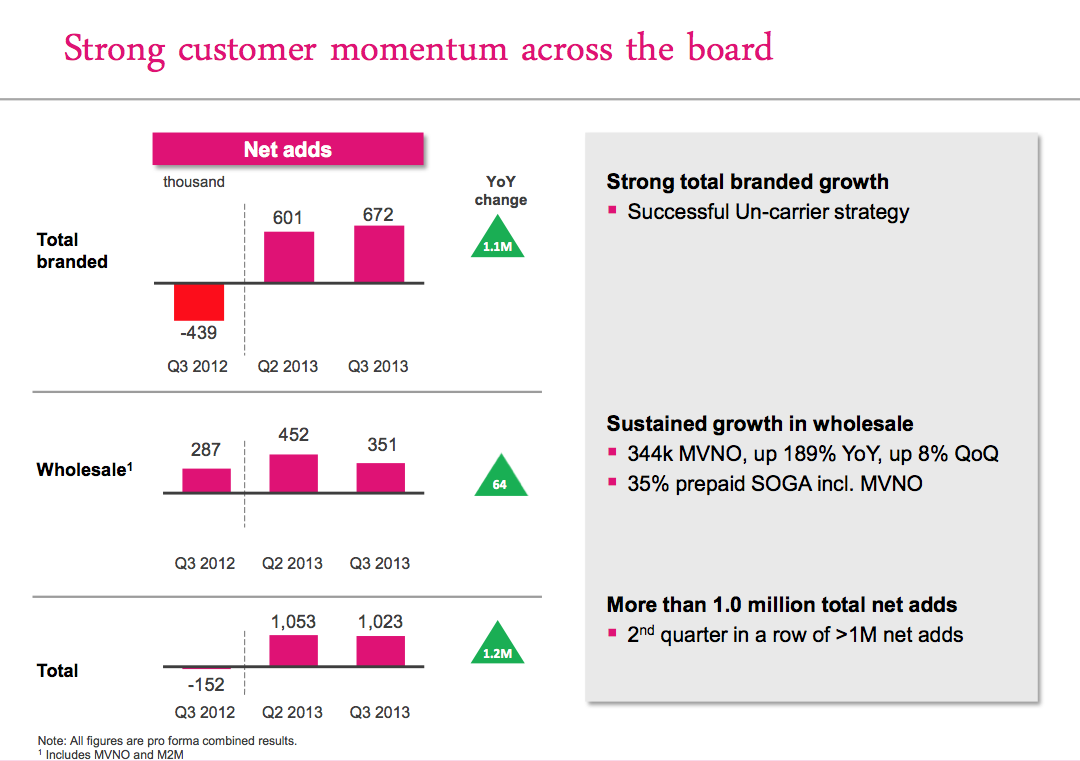 Given T-Mobile no longer subsidizes phone costs, the average per-customer revenue declined as folks switch to the new, less expensive plans. These new plans represented 61 percent of the company’s postpaid customer base, up from 50 percent a quarter ago.

Like other telcos, T-Mobile started selling the iPhone 5s and iPhone 5c on September 20, 2013. True to its Un-carrier strategy, the carrier offered the latest iPhones with introductory prices of $99 down and $0 down, respectively.