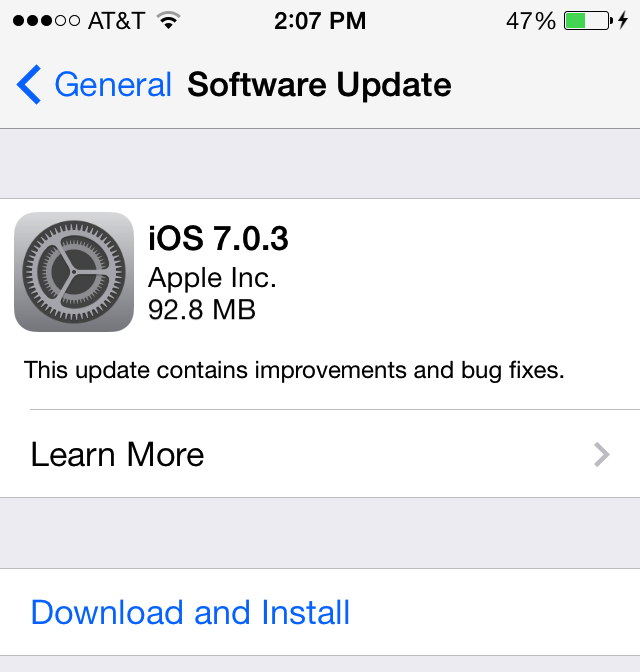 Though there was no mention of it during the iPad event this morning, Apple has just released a new version of iOS. The update, which brings the firmware to 7.0.3, brings about a number of improvements.

On the new feature front, Apple has re-added in support for iCloud Keychain. And as for bug fixes, there are several of them, including ones for iMessage, iPhone 5s sensor calibration issues, and much more…

– Adds iCloud Keychain to keep track of your account names, passwords, and credit card numbers across all your approved devices
– Adds Password Generator so Safari can suggest unique, hard-to-guess passwords for your online accounts
– Updates lock screen to delay display of “slide to unlock” when Touch ID is in use
– Adds back the ability to search the web and Wikipedia from Spotlight search
– Fixes an issue where iMessage failed to send for some users
– Fixes a bug that could prevent iMessage from activating
– Improves system stability when using iWork apps
– Fixes an accelerometer calibration issue
– Addresses an issue that could cause Siri and VoiceOver to use a lower quality voice
– Fixes a bug that could allow someone to bypass the Lock screen passcode
– Enhances the Reduce Motion setting to minimize both motion and animation
– Fixes an issue that could cause VoiceOver input to be too sensitive
– Updates the Bold Text setting to also change dial pad text
– Fixes an issue that could cause supervised devices to become un-supervised when updating software

You can find the update by either syncing your iOS device with iTunes, or opening up the Settings app on your device and navigating to General > Software Update for the OTA (over the air) download.

Of course, if you’re just looking for direct links to the just-released firmware, you can find them on our Downloads page for all of your compatible devices including iPhones, iPads and iPod touches.

Potential iOS7 jailbreakers should stay away from today’s 7.0.3 for now. Too early to tell if it closes anything important for JB.

As usual, folks hoping to jailbreak iOS 7 at a later time should probably hold off on the 7.0.3 update until it has been cleared by the evad3rs, who are currently zeroing in on a working jailbreak for iOS 7.