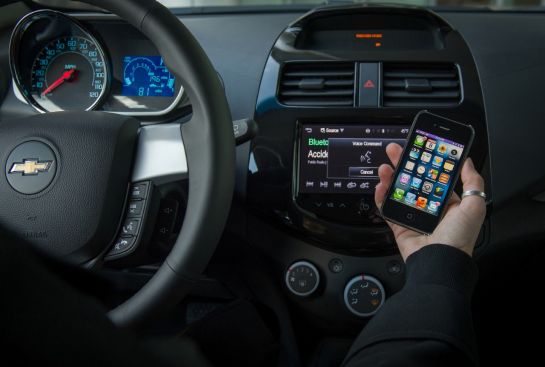 General Motors has issued a press release this week, announcing that Siri ‘Eyes Free’ mode will be coming to several new vehicles in 2014, including the Chevy Camaro, Volt, Malibu, SS, Cruze and Equinox.

The feature, which in GM models works via the Chevrolet MyLink service, connects to compatible iPhones to give users one-touch, in-car access to Siri, allowing them to perform various tasks hands-free…

From the press release (via MacRumors):

“The response to Siri Eyes Free integration in Chevy Sonic and Spark from our customers has been remarkable,” said Chris Perry, Chevrolet vice president of U.S. Marketing. “Easy, reliable and portable connectivity is a top priority for our customers, and Siri complements MyLink’s existing capabilities to help deliver an incredible driving experience, so we’re excited to expand this to even more customers.

Through the cars’ available Chevrolet MyLink infotainment system, customers with a compatible iPhone* running iOS 6 or iOS 7 can direct Siri to perform a number of tasks while they safely keep their eyes on the road and their hands on the wheel.”

Using Siri Eyes Free, late-model Chevy owners will be able to make voice-activated calls to Contacts, play songs from their iTunes libraries, listen to and compose iMessages, and access their Calendar app.

GM was the first to launch a vehicle with Siri Eyes Free built-in earlier this year, with both the Sonic and the Spark. Other auto-makers have announced support for the feature, but few have implemented it.

In June, Apple announced that it would be taking its in-car integration a step further in iOS 7 with ‘iOS in the Car.’ The feature uses a vehicle’s existing display, and is expected to start turning up next year.