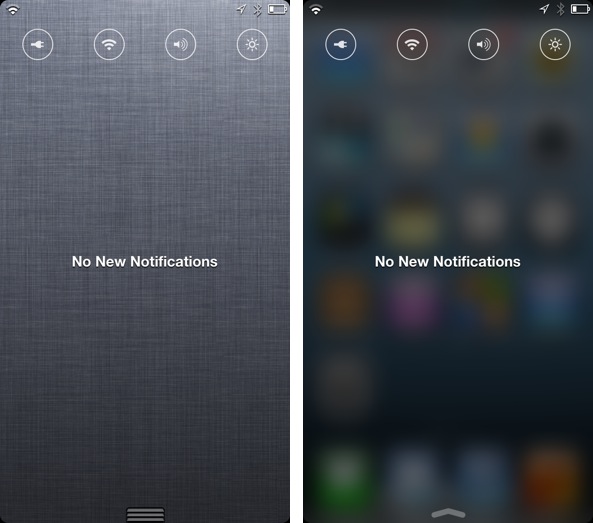 Like every other facet of iOS, Notification Center received a significant visual overhaul in iOS 7 when compared to iOS 6 and below. Gone are the opaque linen textures in favor of a simple and clean semi-transparent overlay.

If you’re running a jailbroken iOS 6 installation, then it’s possible to gain some of Notification Center’s new visual cues. SevenCenter is a new jailbreak tweak that brings the iOS 7 Notification Center experience to iOS 6, and iOS 5 devices. Have a look inside to see what I mean.

Once installed, there are no options to configure or settings to change, just install it and go; SevenCenter begins working immediately after installation.

The changes aren’t massive, but as you can see from the screenshot comparison at the top of the page, it’s a noticeable departure from the real life textures present in lesser firmware. All functionality remains identical as before, but the look mimics the cleaner style present in iOS 7.

SevenCenter is a free download via Cydia’s BigBoss repo. Its developer, Jonas Gessner, has created other tweaks like ProTube in the past. Be sure to share your thoughts on SevenCenter in the comments below.