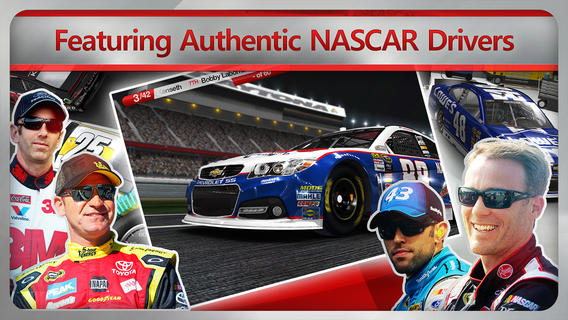 I’ve never been a big fan of NASCAR but I do remember spending a big chunk of my pocket money on the arcade game Daytona USA. I specifically recall races starting with the iconic “gentlemen, start your engines” announcement.

Fastforward to today, and I’m still not a big NASCAR fan, but I can certainly appreciate some of the strategies that go into the races. The right set of brakes, tires, or suspension can actually make or break a race.

NASCAR: Redline is the first officially licensed NASCAR game to make its way in the App Store. Although you won’t be in the driver seat, your role will be to ensure that every decision made is the right one in order to take your team to the victory…

“NASCAR is unique among motorsports and racing games; it’s about more than just the action on the track,” says Terry Lee, Producer of the game. “It’s about choices – the decisions made behind the wheel and under the hood – fine tuning not just your vehicle, but your strategy for victory, taking control of the race and pushing beyond the stretch of asphalt in front of you. These are elements we’ve focused on which really propel NASCAR: Redline past other racers in the pack.”

As mentioned above, this is not a racing game, but rather a strategy game where you will have to make the big technical and tactical decisions. Decide what set of tires to use, when to refuel, etc.

Featuring a complete roster of 43 drivers, teams, sponsors, and tracks from the 2013 season, NASCAR: Redline brings the genuine NASCAR Sprint Cup experience to your iPhone or iPad.

NASCAR: Redline is a universal application available for $4.99 in the App Store.