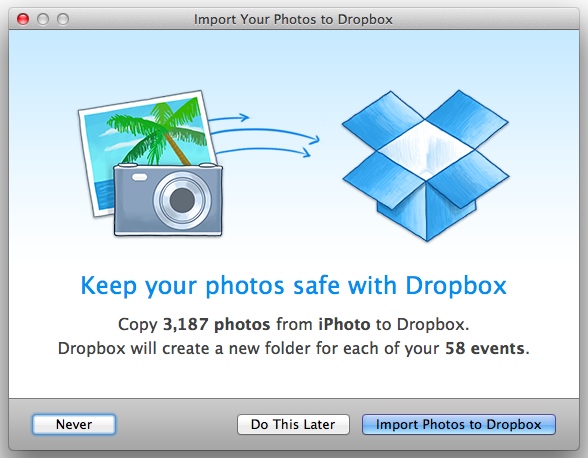 Dropbox has released an update for its Mac client this afternoon, bringing it to version 2.4. The update brings about a number of improvements for the app, including the ability to auto-import photos from iPhoto directly to Dropbox.

The release also brings about automatic screenshot uploading—a feature users have long been asking for. Dropbox will now upload any and all screenshots you take on your Mac (or Windows PC) to the cloud for immediate sharing…

From the company’s release notes:

“Starting today, all the screenshots you take can automatically be saved straight to your Dropbox. And on top of that, Dropbox will also create a link to your screenshot and copy it to your clipboard — so your picture’s instantly good to share. Whether you’re capturing screenshots of websites, favorite dog videos, or video calls with your buddy in São Paulo, now Dropbox can help keep your computer a little more organized.”

Like the company’s automatic camera upload feature it introduced late last year in version 2.0, screenshot sharing can be turned off and on at your convenience. It’s a great addition and I hope that we eventually see it in the mobile app.

As for iPhoto-importing, I don’t really like using the app so it’s tough to speak to this feature specifically. But for folks who do use it, this would be an easy way to get peace of mind—knowing all of your photos are backed up to the cloud.

If you’re interested, the latest version of Dropbox for Mac can be downloaded from the Dropbox website for free.