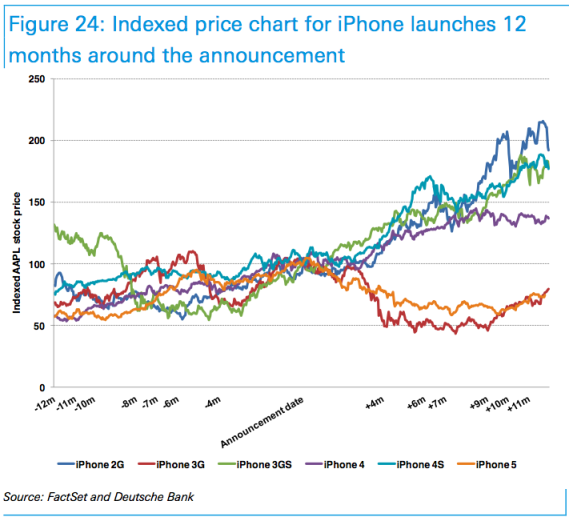 Here is an interesting graph to look at, a day before Apple is set to announce not one, but two new iPhones, which we’ll call the iPhone 5S and the iPhone 5C, at least until Apple proves us wrong.

This chart, created by Deutsche Bank’s Chris Whitmore takes a look at the Apple stock price during the months before and after an iPhone announcement…

As you can tell, the stock goes up in all cases, except after the announcement of the iPhone 3G, which, as Philip Elmer-Dewitt notes, was launched a couple months before the US officially entered the biggest economic crisis since the Great Depression. The stock also goes down following the launch of the iPhone 5, which happened the day Apple’s stock hit its peak at $705.07.

Of course, it’s almost impossible to draw conclusions from this chart. If anything, my money would be (and it actually is, since I own some Apple stocks) on the stock going up in the next few months, especially due to high probability that Apple inked deals with Japan and China‘s largest carriers, opening the doors to considerably more potential customers.