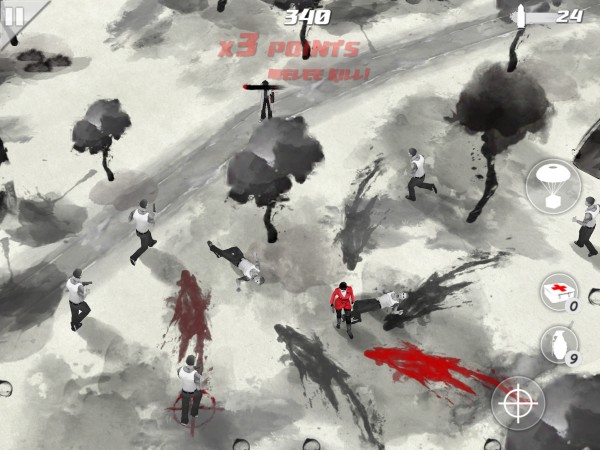 Currently in development by the Moon Shark studio, Bloodstroke takes place all over Asia.

The game puts you in the shoes of Phalanx’s elite private security agent code-named Lotus (real name: Mai Lee) who gets involved “in an exciting story.”

The game’s premise determines most missions, which revolve around protect your employer on the streets of Hong Kong and Beijing. Bloodstroke strives to set itself apart with a nice black and white graphic style, with colors being used only sparingly and consciously for emphasis (hint: blood)…

In addition to swords, the main protagonist will have several firearms at his disposal. As is the norm these days, players will be able to upgrade their character extensively throughout the game.

I love a pseudo-runner progression.

Here’s another video. Hopefully you’re German isn’t as rusty as mine.

All told, expect about thirty levels and a variety of enemies and weapons, melee attacks, achievements, Arena mode and more. Sin City-ish visual style is wickedly brilliant and I have no doubt in my mind that its goreness will appeal to the vast majority of iOS gamers out there.

Plus, it has John Woo’s stamp of approval all over it – the director personally penned a series of comic book panels that unfold the story as you progress through the game.

Though Chillingo isn’t telling much at the moment, Bloodstroke should hit the App Store in October as a paid download with some in-app purchases.