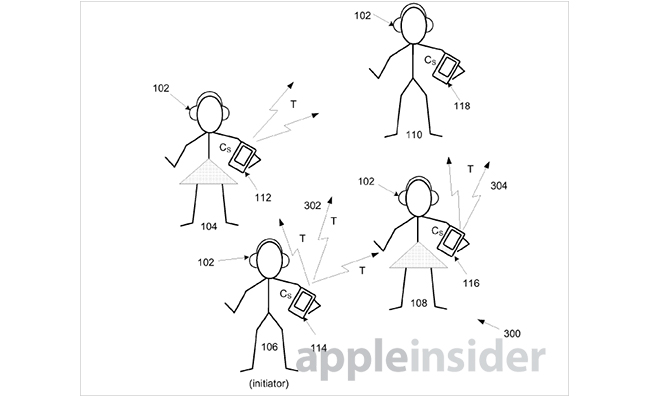 Combine the huge iTunes library of songs with the social aspect of sharing and you have a bit of an idea what might be behind a patent granted to Apple Tuesday by the U.S. Patent and Trademark Office.

The patent, which describes a ‘Coordinated group musical experience,’ takes a riff off a trendy activity known as ‘silent discos,’ where people gather to listen to a DJ’s music wearing headphones, rather than blaring mega-decibel volumes. Does the patent address a glaring technology need? No, but it does remind us of Apple’s own quirky roots…

According to Apple’s patent abstract (via AppleInsider), the invention involves the “sharing of a music experience amongst a group of people each using a personal communication device,” including the iPhone, iPad or iPod.

Rather than simply sharing song amongst a number of people, the technology transmits a song’s traits, like tempo and number of beats per minute. The system then searches your music database, picks the closest match and we’re off to the disco.

Apple has patented other forms of device sharing, including sharing the flash feature to produce the best lighting for a photograph. Although some quality iOS apps for DJs have been released on the App Store, today’s patent may indicate Apple is considering creating one for its base of iTunes users.

In the patent, the company mentions that the technology for a ‘silent disco’ can fit in a single app. Whether this means a standalone app is possible, or Apple is thinking of including the technology in iTunes – or something not envisioned, is up for conjecture.