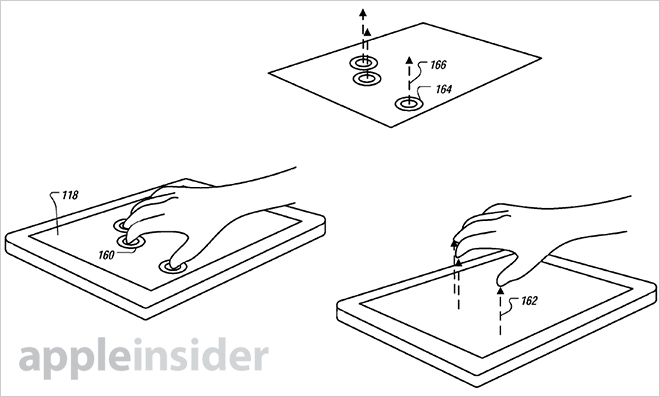 Imagine the iPad’s touch screen gaining a third dimension, enabling users to extract a 2D image, then manipulate it using new gestures, such as ‘pull’, ‘push’ and ‘sculpt’. That’s the gist of an Apple patent filed in 2012 and published Tuesday by the U.S. Patent and Trademark Office.

Titled ‘Working with 3D Objects,’ the patent outlines a touch screen interface where users “generate and manipulate 3D objects using 3D gesture inputs.” At the core, the technology employs both capacitive touch sensors and proximity sensors in the iDevice screen…

To create a 3D object from a 2D image on the screen, the Apple patent describes a new gesture called pull, activated by touching an object.

For instance, to create a 3D triangle, you would touch the 2D version in three places, then hover for a certain period of time. The height of the 3D triangle is then determined by how far you pull, according to AppleInsider.

Along with 3D shapes, the Apple patent also outlines the ability to ‘sculpt’ items, using ‘twist’ to manipulate a clay-like 3D object. The 3D gestures could also be manipulate iDevice controls, such as buttons and sliders to change the color and brightness of objects.

Here’s a good example of an iPad 3D modeling app that could use such 3D gestures.

While unclear whether Apple will incorporate the 3D gesture technology in its family of iDevices, the ability to offer a gesture feature along with a gaming platform could be a marketing advantage over current products on the shelf.