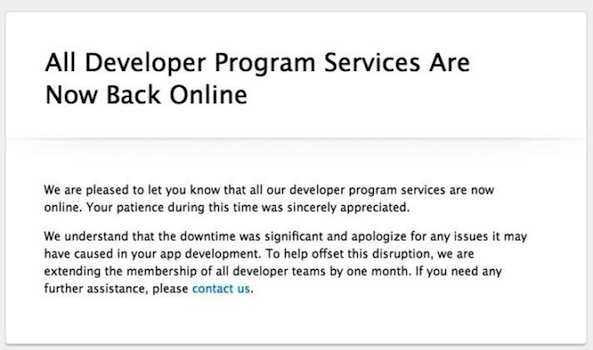 Apple sent out an email to developers tonight, informing them that all Developer Program Services are now back online. The news puts an end to a three week outage, which began mid-July following a security breach on Apple’s Developer website.

Since the breach, Apple has promised to overhaul its developer systems and rebuild its database in order to prevent something like this from happening again. And over the last few weeks, it has slowly been bringing its various services back online…

Here’s the email going out to devs:

“We are pleased to let you know that all our developer program services are now online. Your patience during this time was sincerely appreciated.

We understand that the downtime was significant and apologize for any issues it may have caused in your app development. To help offset this disruption, we are extending the membership of all developer teams by one month. If you need any further assistance, please contact us.”

As promised, Apple has extended developer memberships to make up for all of the down time. Devs will be pleased to see that 1 month has been added to their remaining membership time, meaning if you were set to expire next May, it’s now next June.

We’re still not sure exactly what happened to cause Apple to take the Dev Center offline in the first place, outside of the company’s vague recount of it detecting an ‘intruder.’ A security researcher claims responsibility, but that has yet to be confirmed.