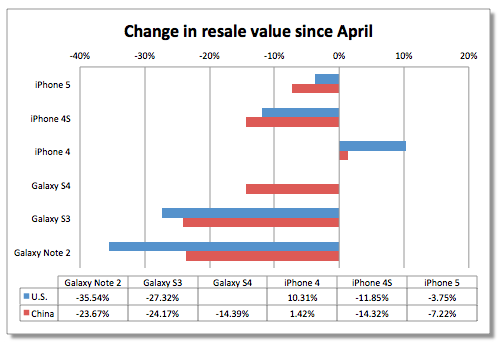 Unlike the auto which loses much of its value the moment you drive off the dealer’s lot, iPhones tend to remain valuable to owners. According to new research, Apple’s handset does better at retaining its value, compared to Android phones. In a related study, trade-in programs are increasingly important to smartphone owners deciding on carriers.

Although the value of Android phones fell by as much as a third in three months, iPhone prices actually go up. The price of an iPhone 4 asked on eBay was 10.3 percent higher than at the start of the three-month period, one Wall Street analyst found…

Piper Jaffray’s Gene Munster measured the resale value of three iPhones and three Android handsets in the U.S. and China, starting in April. During that period Samsung phones powered by Google’s mobile software fell between 14.4 percent and 35.5 percent, according to Fortune.

Apple’s worst performance, in terms of resale value, came from the iPhone 4S, which lost between 11.8 percent to 14.3 percent of its value over three months. The iPhone 5 lost 3.75 percent to 7.2 percent, according to the Munster and his team.

What’s striking is that the iPhone 4 actually gained in value over the period: between 1.4 percent in China to 10.3 percent in the US.

What does this say about the rivalry between the iPhone and Android? 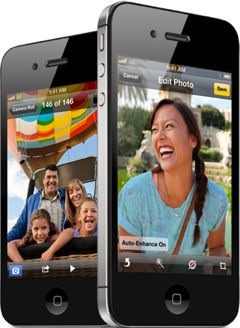 “First, the iPhone 5 has maintained its value better in China than the Galaxy S IV which shows continued support for Apple’s flagship device within China,” the analyst told investors Wednesday. Despite Android handsets controlling the bulk of China’s smartphone sales, “Apple appears to be maintaining mindshare in the high end market,” he adds.

The absence of a sharp decline in resale prices for the iPhone also means owners are not expecting a new version of the device – or worse, a shift in preference toward the Samsung handset. However, as we get closer to September, a time when many expect Apple to announce new devices, we’ll likely see the iPhone aftermarket prices fall, he concludes.

Talk of the aftermarket prices of iPhones comes as rumors abound that Apple may get into the handset trade-in business. In a July survey, more than half of smartphone owners asked, said they would trade in their old handset when time to upgrade.

Some 60 percent of the survey respondents said they would pick their next wireless carrier based on the trade-in program, according to Connected Intelligence.

As the investing site Benzinga notes, carriers such as Verizon Wireless, AT&T and T-Mobile have beefed-up their trade-in policies, as well as made it easier for consumers to more quickly upgrade their smartphones.

For Apple itself, a trade-in program could not only be a response to consumers valuing older iPhones, but a step toward Apple retail locations selling more handsets.

Currently, most iPhones are purchased through carriers, a situation Apple CEO Tim Cook would like to change. Cook envisions half of  iPhones being sold through Apple retail, currently responsible for just fifteen percent of iPhone sales.