Although AT&T was the first U.S. carrier that sold the iPhone when Apple introduced the smartphone in 2007, Verizon Wireless quickly overshadowed the telecom giant. For the first time, AT&T has stolen the spotlight back, outranking rival Verizon in customer service satisfaction.

No, hell did not freeze over. And, yes, this is the AT&T that late last year was voted having the worst voice and data service, had all the tethering issues and is constantly sniping with about everyone…

Still, the carrier scored the highest of the last three previous J.D. Power’s customer service surveys, according to new data. The research firm found AT&T scored 795 out of a possible 1,000. Verizon, which used to be the customer satisfaction champion, slipped to No. 2 with 790 points.

Both Sprint and T-Mobile ranked below 786 average for contract carriers.

After weeks of declaring itself better than Verizon for speed and reliability, AT&T Thursday touted its efforts to boost the wireless experience.

Along with scoring high for its retail service, “AT&T also scored the highest in the industry for its online experience, which had the biggest improvement over hte past six months,” the carrier wrote in a media release. 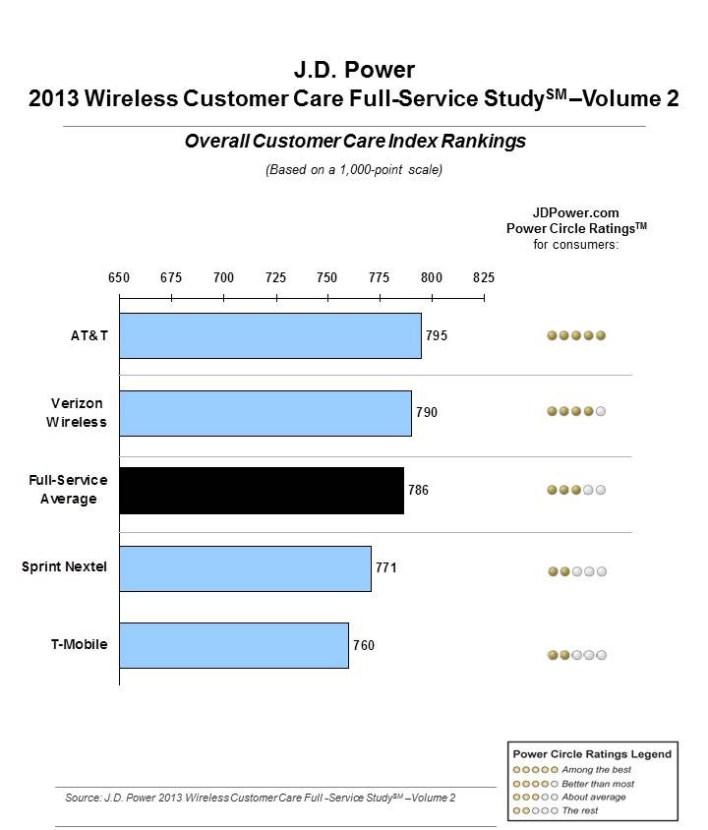 AT&T pointed to its 24/7 online service, the ability to schedule store appointments online, as well as increasing the number of AT&T chat representatives. That last item seems to be increasingly important when it comes to determining carrier customer satisfaction.

“J.D. Power found that customers are increasingly contacting their carriers online, versus over the phone or in the store, when they have a service issue,” GigaOM noted.

That point was driven home recently when I had to endure multiple sales pitches while picking up an iPhone at the local  Verizon store.

Here’s a video AT&T put together to promote its new store design and customer experience.

Of course, this ranking by AT&T is unlikely to last.

Then again, we may be seeing a turning point where a carrier’s retail location – and all the effort poured into sumptuous surroundings – are less important to customers. So much of brick-and-mortar retail now is to showcase products, not sell them.

Isn’t it time smartphone carriers of all people understood that, as well?