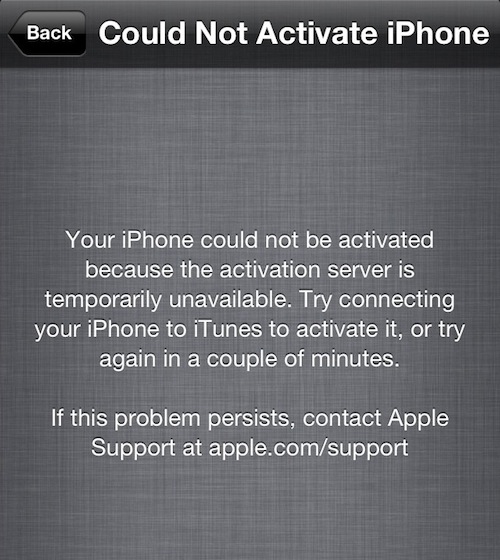 Just when I thought Apple has started to recover from the Dev Center breach and that the brouhaha couldn’t get any worse, now comes word that iTunes activation servers have been experiencing an extended outage for the past few hours. No matter how you look at this, it’s another blunder for Apple.

Without iTunes servers working, customers are unable to activate their handsets. Apple’s servers used to melt under heavy load before, but it always happened shortly after a new iPhone had gone on sale (2007/2008/2009 iPhone launches), never mid-cycle like today.

I also couldn’t figure out how widespread the issue was.

“Your iPhone could not be activated because the activation server is temporarily unavailable,” reads the message on users’ screens.

“Try connecting your iPhone to iTunes to activate it, or try again in a couple of minutes,” Apple advises.

Trying to activate a new iphone AND.IT.WONT.WORK. *COMBUSTS IN RAGE*

According to one tipster who called Apple about the problem, the company’s activation servers are currently down.

Another AT&T employee has told MacRumors that AT&T has also confirmed the outage, and posts in Apple’s discussion forum offer similar information.

If posts in Apple’s discussion forums are an indication, the company is aware of the problem and has already dispatched engineers to fix it.

I know technology occasionally breaks so maybe I’m reading too much into this. Hopefully, Apple will get iTunes activation servers running again within a reasonable amount of time.

At any rate, do hit us in comments if you’re experiencing similar symptoms trying to activate your iDevice.