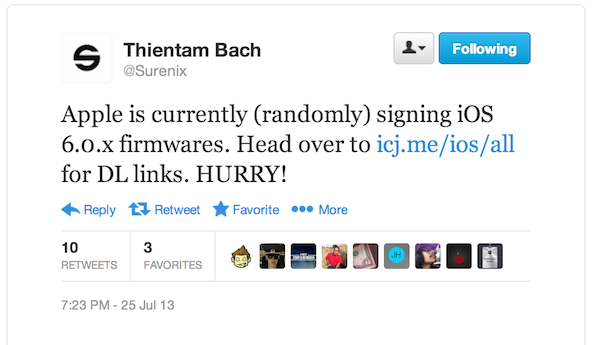 Good news for folks who lost their jailbreak updating their iOS device to try out iOS 7, it appears that Apple is currently signing 6.0.x versions of iOS firmware. This means that you should be able to downgrade your iPhone or iPad to iOS 6 and re-jailbreak.

Well-known iOS hacker and jailbreak developer iH8sn0w was the first to spot the reopening of the signing window, and we have since had multiple users confirm to us that they have successfully downgraded and re-jailbroken their devices. More after the fold…

Here’s a list showing some of the different versions of iOS 6 that Apple is signing for the iPhone 5. You can find them all here. 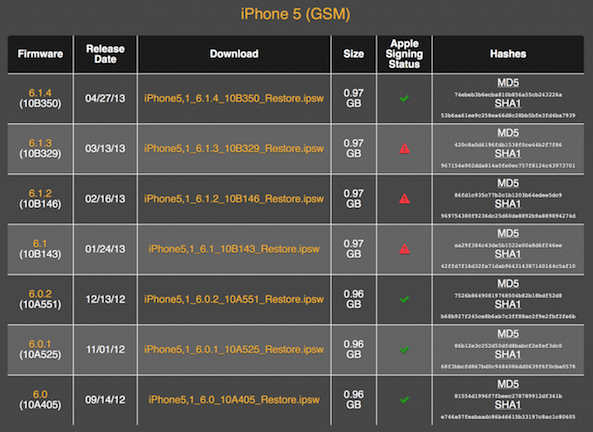 Those on newer firmware versions should downgrade as soon as possible before the signing window closes. You can download the 6.0.x firmware of your choice from our Downloads page. If you need help downgrading we have tutorials, but here’s a quick rundown:

Once you’ve successfully downgraded, you’re free to jailbreak. Evasi0n is the utility you’re going to want to use, as it works with the aforementioned versions of iOS 6. If you need help doing that, we have easy to follow step-by-step tutorials for both Windows and Mac users.

The iOS 6 jailbreak is brought to you by the evad3rs team—made up of MuscleNerd, pod2g, planetbeing, and pimskeks. It landed on February 4 of this year, and withstood two iOS software updates before being killed by Apple with iOS 6.1.3. Tonight, it gives us an encore performance.

Update: Sorry guys, it looks like the window has closed and Apple is no longer signing older firmware.