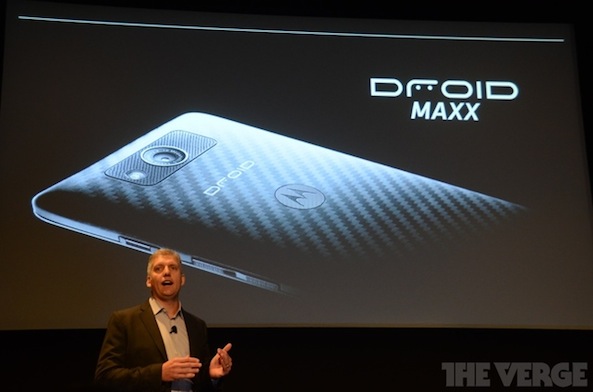 Despite the fact that it’s gearing up to launch the Moto X next week, Motorola joined Verizon on stage this morning at a very low key event in New York City to introduce a trio of new Droid smartphones: the Droid Mini, the Droid Ultra, and the Droid Maxx.

All 3 handsets seem like decent offerings, but the Mini and the Ultra were most decidedly overshadowed by the Droid Maxx. In addition to its 5-inch, HiDef OLED display and 8-core processor, the Maxx promises up to 48 hours of ‘typical use’ battery life… 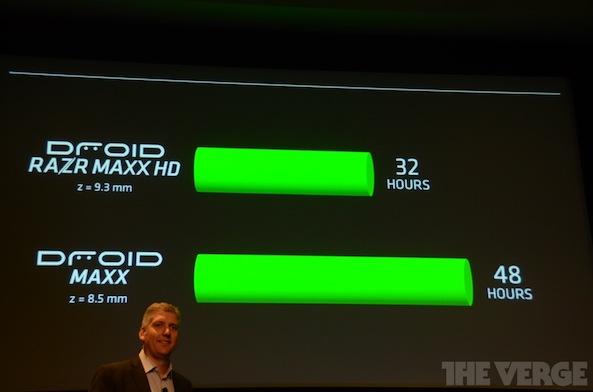 48 hours. Wow. Let’s put that into perspective. Apple says that the iPhone 5 battery is good for up to 8 hours of talk time on 3G networks, and 8 hours of Internet use. And in general, reviewers have found that the device lasts about 12 hours with ‘typical use.’

Motorola reportedly achieves this amazing feat with a 3,500 mAh battery. But even with the bigger pack, the Maxx is only 8.5mm and sports the X8 system-on-a-chip—an 8-core chip with 2 app cores, 4 graphics cores, and two contextual/natural language cores. 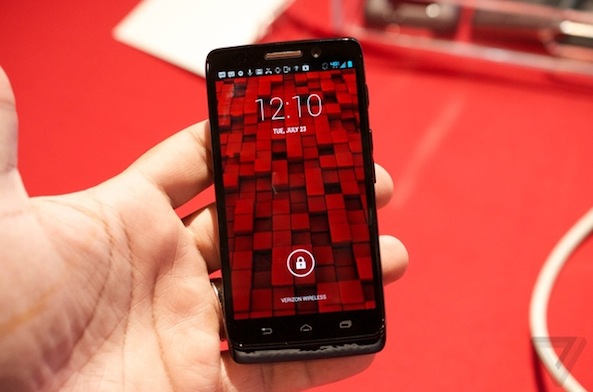 Other Maxx hardware specs include 2GB of RAM, a 10-megapixel camera with 1080p video recording, a 2-megapixel front-facing camera and 32GB of internal storage. The casing is surrounded by gorilla glass and kevlar, and is both durable and water resistant.

On the software side, the Maxx is said to run Android 4.2.2 Jelly Bean and sport a host of features. For instance, it has the Moto X‘s always-on Google Now assistant, as well as a ‘Quick Capture’ camera launcher and a media sharing feature called ‘Droid Zap.’

Here’s a hands-on video from CNET:

Over all, the new Droid Maxx looks extremely impressive on paper, but it’ll be interesting to see how well all of this translates into every day use. We’re not sure it’ll be enough to topple the Galaxy S4, or to lure customers aware from the Moto X or iPhone 5S.

If you’re interested, the Maxx will be available from Verizon starting August 20. The price is a bit steep though, at $299.99 with a two-year contract.

Man, that 48-hour battery life sure is tempting, but nothing else about the device really appeals to me. What do you think of the Maxx?

images via The Verge