It looks like T-Mobile’s recent Uncarrier campaign is starting to catch the attention of the other major US carriers, because hot on the heels of it announcing its new ‘Jump’ upgrade program, comes word that Verizon may be following suit.

The news comes this afternoon in the form of a [purported] leaked Big Red training slide. The slide details ‘VZ Edge,’ a new upgrade plan that allows Verizon subscribers to pay a monthly fee for the ability to upgrade their devices more frequently…

“According to sources of ours, Verizon will introduce a new upgrade initiative on August 25 called “VZ Edge” that will allow customers to upgrade their phones much more frequently to “stay on the leading edge of technology.”

In an training slide detailing the new plan, we can see that Verizon is offering up VZ Edge as a way for customers to avoid signing contracts and upgrade fees, while remaining on the “best network” and with the latest devices.”

Not much is known about the plan, but the slide offers up a few details. In the ‘what is VZ Edge’ section, it reads: “Customers can pay a monthly fee instead of purchasing a device upfront, and upgrade anytime once 50% of the device is paid off.” 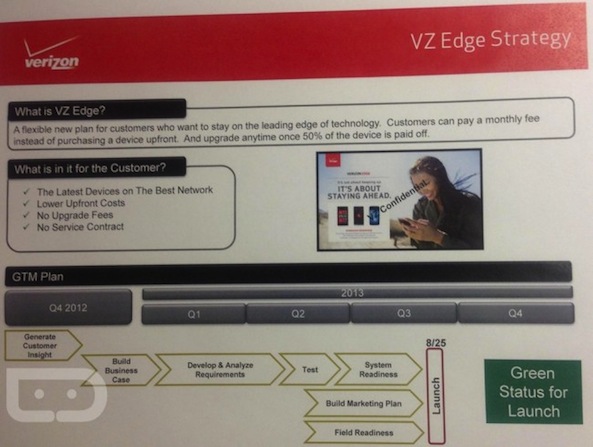 Interestingly enough, Verizon was going in a completely different direction earlier this year, when it up and terminated early upgrades. Obviously, it could have been planning this all along, but it certainly seems like T-Mobile is ruffling some feathers.

More information should be available on August 25, when the program is reportedly slated to launch. It’ll be interesting to see what Verizon charges for the VZ Edge plan, and how other carriers react—particularly AT&T who likes to follow its lead.

What are your thoughts on this alleged VZ Edge plan?