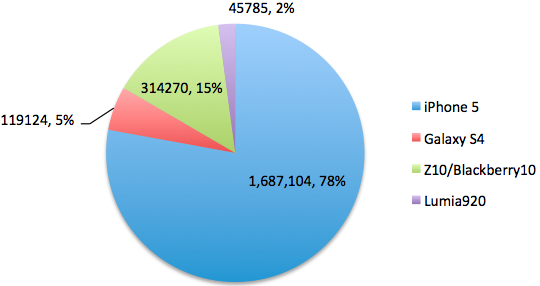 Judging from last week’s online chatter over whether people hate the iPhone 5 or love Samsung’s Galaxy S4, you’d have thought the tech press had returned to high school, where the halls are filled with BFFs and everyone dots their ‘i’ with hearts.

However, there is some actual news coming from that torrent of tweets and Facebook posts.

Apple, long admired for its tight control of information, is great at talking up its brand, but does little to guide the conversation once a product is launched. Hence, the iPhone 5 ‘most hated’ drivel…

We Are Social sparked the whole ‘most hated’ talk by giving The Daily Mail a sneak peak into its research on how smartphone brands handle conversations about their products.

The British newspaper ran a story under this headline: “Apple’s iPhone 5 is the most hated handset — while the majority of people love the Samsung Galaxy S4, study finds.”

Shortly after, it went viral.

We Are Social – which helps brands such as Intel and eBay navigate social media – found an overwhelming amount of talk about the iPhone 5’s launch, but Apple’s rivals were better at steering the conversation to the features of their products.

Researcher Edward Kitchingham wrote this at the company’s blog:

Apple has established itself as being more innovative than its rivals and some fans felt that the iPhone 5 didn’t deliver on this reputation. And Apple did little to answer these questions.

Despite the iPhone 5 launch attracting a huge amount of talk (see the pie chart top of post)  – 1.7 million mentions – on social media, Apple did little to push positive messages about the handset.

As a result, there was little talk of the smartphone’s features and a high level of criticism. 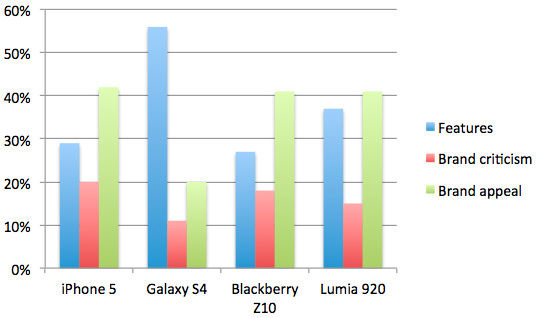 By contrast, the launch of the Galaxy S4 produced just 140,000 mentions, yet the majority of the chatter was steered toward features. BlackBerry generated 300,000 mentions when its Z10 launched and Nokia’s Lumia 920 produced 45,000, per data.

Also funny how the We Are Social data isn’t reflected in customer satisfaction surveys. What gives?

For instance, invitations to the launch announcement were sent out through social media, there were sneak peaks into the upcoming Galaxy model, capped by ‘mark your calendar’ and other excitement building tactics. 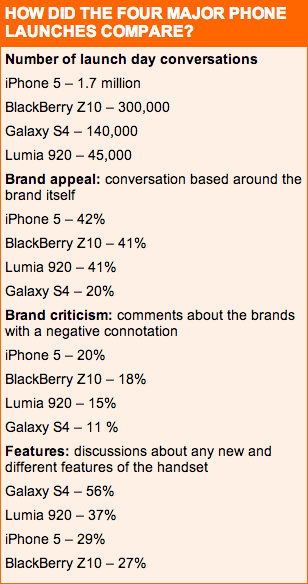 In the end, while Apple mops the floor with competitors when it comes to slick television ad campaigns, an army of online fanboys and a generally positive tech press, it remains mum on rumors and does little to satisfy the desire of fans looking for details about upcoming products.

Here’s how We Are Social’s Ed Kitchingman explained the challenge for Apple to Fortune’s Philip Elmer-DeWitt:

Apple’s iPhones are still the conversational benchmark for all competitors to aspire towards, but it’s lack of proactivity and staid marketing tactics leave the social space open for other brands to take advantage.

It isn’t too late for Apple to update its marketing playbook.

Perhaps provide the company’s many evangelists with a list of talking points so that both fans and consumers have something good to say about Apple before the party is over.

After all, television networks are about to build enthusiastic fan bases over fare that’s ho-hum at best. Apple has much better products with features that shouldn’t be hidden under a bushel – or a ‘no comment.’