A child of the console revolution, there is nothing better than tactile feedback when gaming. None of these new age children know the feeling of a Game Boy D-Pad. Instead they are stuck with slick screened iPod touches, where the most tactile feedback they will feel is the orange peel rubberized drag of a ZAGG invisibleSHIELD. Don’t get me wrong, I am a fan of iOS gaming, but there is just something more than nostalgic about tactile feedback.

Some day, not in the near future, Apple will finally include haptic feedback in their screens courtesy of a Senseg-like interaction between the screen and electrons on the finger. However, until then, we are stuck. In an effort to match the desires of similar tactile fans, Ten One Design provides the Fling analogue joystick for iOS devices…

The Fling package comes with one or two joysticks and a microfiber carrying pouch to keep things tidy. Each joystick has a plastic, coiled design which allows movement within a specific diameter. The coiled arm is twisted into a circular frame with an approximate 1.5″ diameter. The large diameter is great for controls, but can often cover on-screen menus when in menu screens. 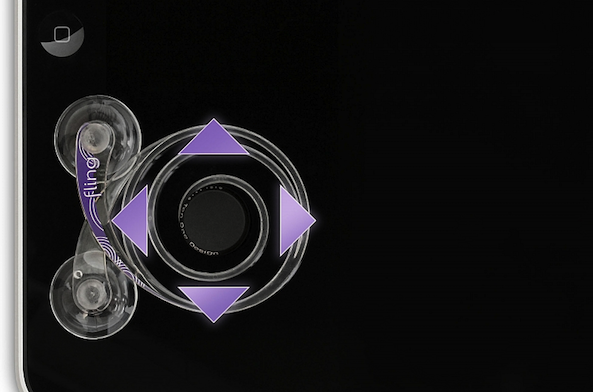 The coiled design is perfect for feedback, providing just enough resistance to really feel the game as you play it. I spent a while playing Street Fighter IV on my iPad mini. Yes, it is made for iPhone, but the x2 mode is decent. Prior to using the Fling joysticks, I could barely tell where my thumb was on the virtual keyboard. Consequently, performing a combo move like Ryu’s Hadouken spirit Ki attack is nearly impossible. After locking the Fling double suction cups onto my mini, the combo directional attacks became extremely simple.

I did find a particular drawback to using Fling for virtual joysticks. As I mentioned, the diameter of the device is fixed. Therefore, if the virtual joystick on your game is in excess of 1.5″ across, the Fling will not reach the edge of the control area. Virtual joysticks that are not digitally proportional are not usable with Fling, unless it can reach the absolute edge of the directional area on the screen. 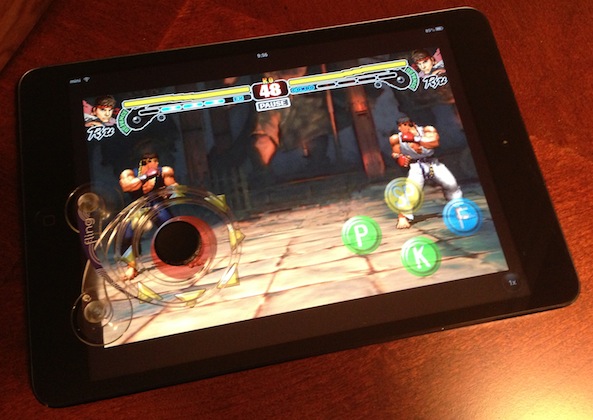 To help control the expectations of users who purchase Fling, there is a compatibility list on the Ten One Design website and a crowd sourced Google doc, where users have posted games for use with the device. When shopping the App Store, certain games also feature a Fling compatible designation in their app description or logo on their screenshots.

When it comes to screen scratches, I did have my reservations. The joystick button is exceptionally smooth, but the plastic is a little less forgiving. There were no scratches on my mini after some rough gameplay, but I am still leery. Coating the bottom of the coil with a microfiber would eliminate the smooth controls, but would offer some protection. Sliding anything across your device screen is always a risk.

At the very reasonable price of $8.99 for one, $13.92 for two, it is a no brainer for avid gamers. If you are a lover of tactile feedback or need extra grip on your virtual joystick, give these a try. As I mentioned, my screen did not suffer any scratches or degradation because of the sticks, but I still want to throw out a word of caution to would-be purchasers.

For those interested in a small option, Ten One Design also sells the Fling mini Dual Pack for iPhone and iPod touch. These are offered for $12.95 and also utilize the dual suction cup and coiled design.

What do you guys think about these joysticks? Has anyone else used them? Give your thoughts in the comment section below.