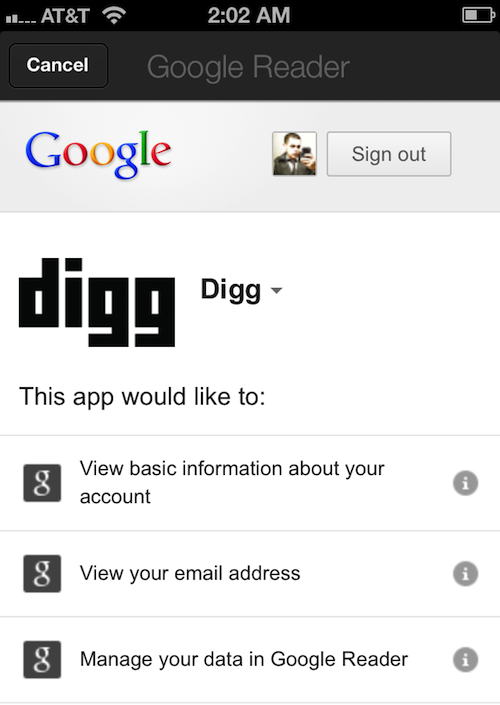 Then, earlier this month, the Digg team announced that it was finishing up work on the first version of its Reader replacement, and that it would start rolling out to users on June 26. And last night, it made good on its promise via an update to its iOS app…

The update brings the app to version 5.0. And looking at the release notes, it’s all about the new Digg Reader:

– Introducing Digg Reader! Read the latest articles from your favorite publishers and blogs
– Seamlessly import all of your Google Reader feeds and folders into Digg

The fact that Digg has built its new RSS reader into its existing app was actually pretty smart. It gives the developers a bit of a head start in putting together a user base, and should help promote the rest of its service to Google Reader refugees and RSS junkies.

Importing your Google Reader feeds into Digg is as seamless as advertised. Selecting the option brings up your standard Google login page, and after a successful sign in, the app goes to work. Within seconds, you’ll see all the latest postings from your RSS feeds. 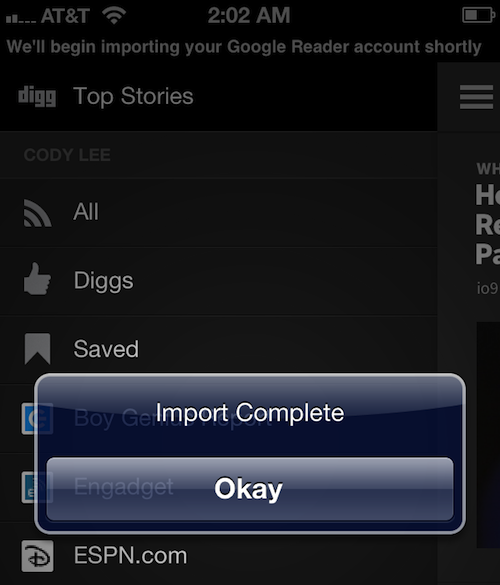 But is this a proper Google Reader replacement? I don’t think so. Reader was more of a sync service to me than anything else, and it was handy because it was connected to my Gmail account. Digg is quick to mention, though, that its service is still very much in beta.

A number of RSS feed readers have popped up since Google announced it would be shutting Reader down on July first. Feedly seems to be out in front, but it’s still anyone’s game. If you’d like to check out Digg’s offering, you can find it in the App Store for free.

Have you tried Digg’s Reader yet? What do you think?