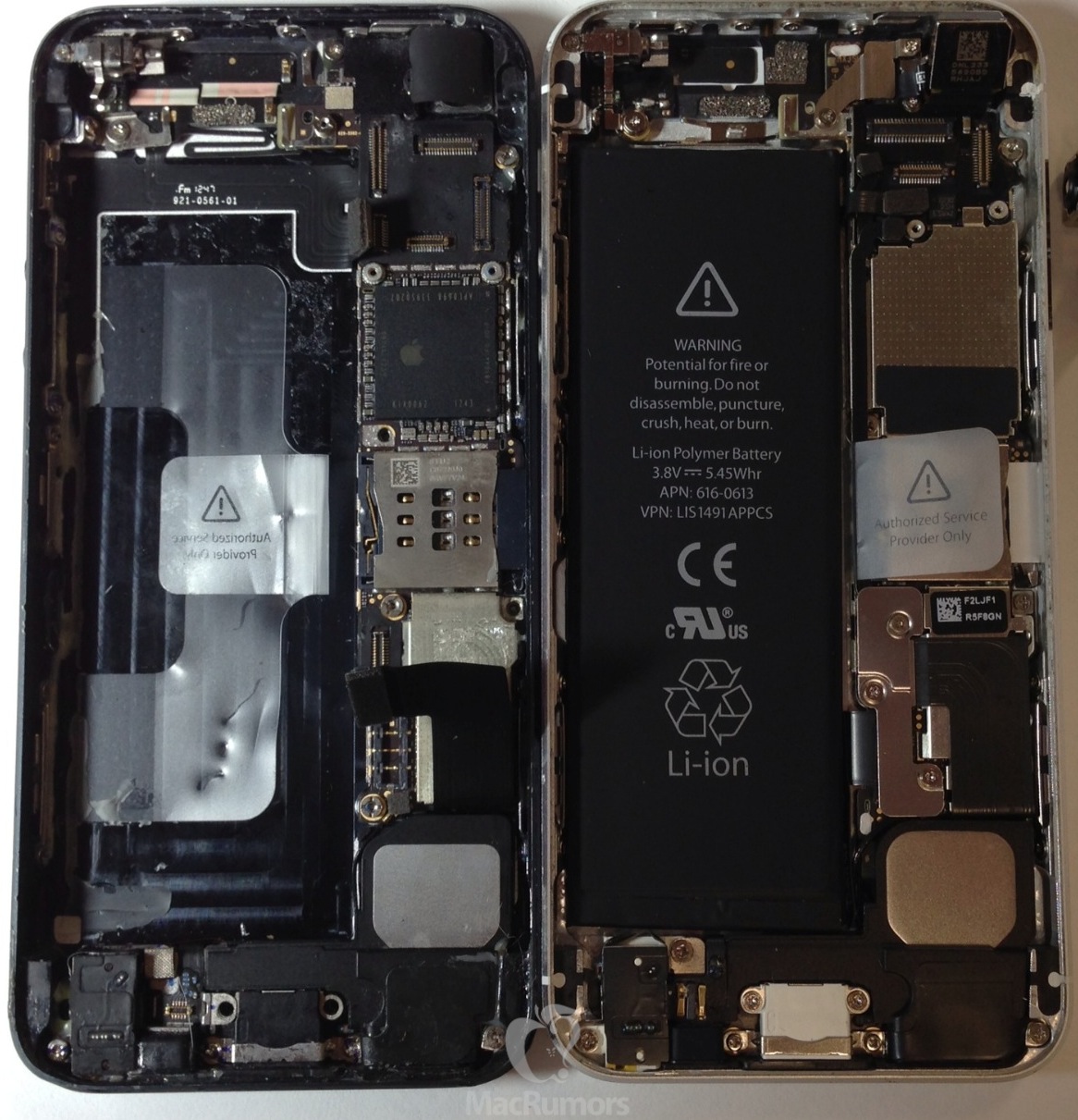 MacRumors last week shared a genuinely-looking photograph believed to picture the back of the iPhone 5S. Virtually identical to the current iPhone 5, the image did tell us that Apple’s upcoming S-upgrade will sport dual-LED flash for better low-light photos, especially coupled with a rumored twelve-megapixel camera. Today, the publication posted a new high-resolution photo suggesting that the upcoming iPhone revision could run a brand new A7 chip rather than a variant of the existing A6 silicon powering Apple’s latest-generation iPhone and iPad…

The top image depicts a prototype iPhone 5S on the left and the current iPhone 5 on the right.

As for the chip, MacRumors observes:

As seen in one photo, the chip carries an Apple model number of APL0698, suggesting that this is indeed intended to be branded as an A7 chip rather than a modification on the A6 chip found in the iPhone 5.

The original A6 chip carried a model number of APL0598, with the A6X found in the fourth-generation iPad carrying an APL5598 model number, demonstrating how Apple varies the first digit for members of a given A-series family and increments the second digit when transitioning to a new family.

Other takeaways include 1GB of Elpida RAM (the same amount seen on the A6) and late-September 2012 manufacturing date based on markings on the chip (making it a rather early prototype).

Dick James and Jim Morrison of chip teardown firm Chipworks were able to determine that a K1A0062 identifier could indicate a new manufacturing source because previous chips had identifiers typically starting with an “N”, which referred to a Samsung part number on the die.

A rumor out of Taiwan this morning suggested that Apple has indeed cut a three-year deal with TSCM to produce next-gen mobile chips for iPhones, iPads and iPods, beginning with the A8 chip in early 2014.

Apple could also be bringing in TSMC as a backup supplier given Samsung’s contract won’t expire until next year and knowing it invested big bucks into technology and capacity of its Austin, Texas facility that exclusively churns out chips for Apple.

There has been some commotion whether or not Apple will introduce a new mobile chip revision with the iPhone 5S or opt for a small ‘X-type’ upgrade. If history is anything to go by, the iPhone 5S should run the A7 chip indeed, just like prior S-upgrades.

For example, the iPhone 4 was based on the A4 chip, but the iPhone 4S was powered by the more powerful A5 package. In fact, each new iPhone since the iPhone 4 has had a major new A-series chip, with iPads getting revised versions of these chips with more powerful graphics and higher-clocked CPU.

Therefore, it’s fairly safe to assume that the next iPhone – the iPhone 5S – will run the A7 chip, with the faster A7X variant likely to make its way inside the iPad 5.

The question is, will Apple be able to get away with another S-upgrade?