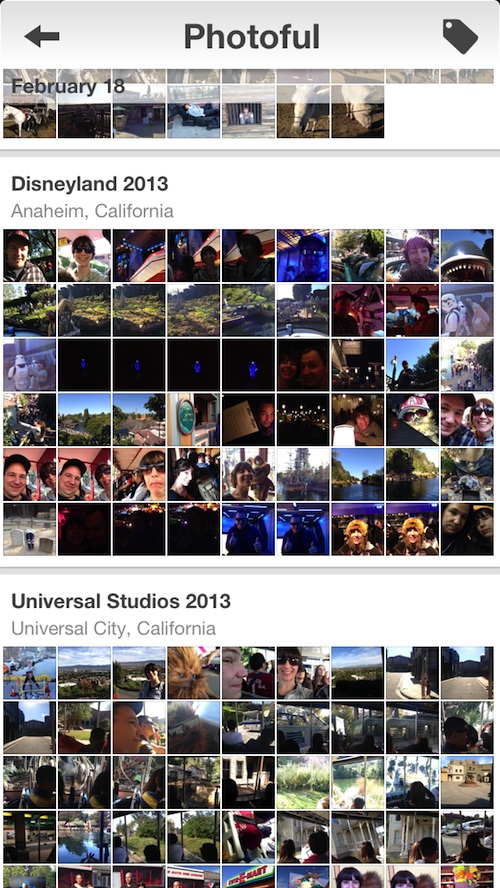 Every time someone writes about the great new look or awesome features that we will see in iOS 7, I get all giddy just thinking about it. I chose not to download the beta because I am the kind of person who actually likes to wait until Christmas morning to open gifts. I don’t want to spoil the surprise.

Just the same, I’m really exited about some of the new features that are heading to my iPhone with iOS 7.  Some of the features I’m looking forward to the most are the changes to Apple’s native Photos app.

Thanks to Photoful, I don’t have to wait until the Fall to take advantage of some of them. This new photo app incorporates some of the “Moments” in iOS 7 features that turn your sea of photos into something more organized and easier to search through…

If you compare the screenshots of this app with screenshots of the changes to the Photos app in iOS 7, you’ll see just how similar they are. Pictures are divided out by dates instead of lumped together in one ugly mass.

The background is a nice clean white with gray font. To see your sets of photos in smaller lists, pinch to zoom out. This feature will be available in iOS 7. This will make more room on the screen for you to scroll through days. Tap on a photo to view it more closely. In this view, you will see images in a blog roll style, scrolling up or down to see the next picture. Tap the picture again to edit or share the image.

To see a list of all labeled albums, swipe the screen from left to right. Your photo sets will be listed by month in one section and by album name in another section.

You can see a list of tagged photos by tapping the icon at the top of the screen. This will show a tiny thumbnail of a handful of the images with the tag’s title overlaid on top.

To select a group of photos in one set, tap the check mark at the top next to the album’s title. You can also select images individually or drag your finger across the screen to select as many as you want. This is also a feature that will be available in iOS 7. 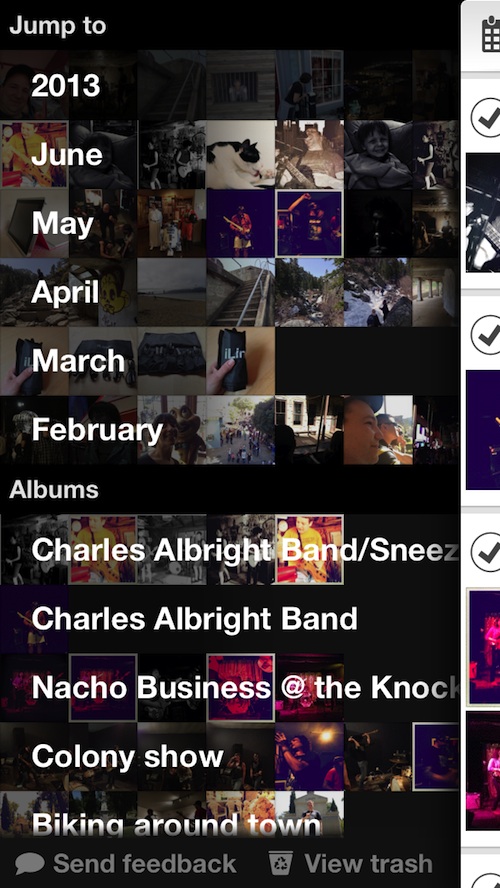 When you first open the app, it will populate all images from your photo library. Unfortunately, it does not grab images from your Photo Stream. Once populated, you will immediately be able to see all of your pictures listed by the date that they were taken. You can then rename the set for that date. If you have a group of pictures that you took during your trip to Disneyland, you can give the set a name. The city and state will stay listed.

To further organize your images, add tags. I have a tag for my cat, my old man, my bands, and my family. There is a list of tags that you can choose from, or you can create your own.

You can add tags individually by tapping the check mark on a photo. You can also select groups that are in one set by tapping the check mark next to the set’s title. If you have a group of photos in a row or two, touch and drag your finger across the screen to grab them all. After you’ve selected as many images as you want, tap the tag icon at the top right of the screen to add the hash tag.

After images have been tagged, you can see them in a group. This circumvents the problem of not being able to organize images if the event covers more than one day. For example, if you took a two-day trip to Disneyland, you could select all photos related and give it a tag so that you can go directly to the set of pictures covering all days.

After you’ve organized your sets, start editing images. Tap an image that you want to see closer. If you don’t like it, swipe to the left to delete it. If you like it, but want to adjust the lighting or add filters, tap the “Edit” button. You can enhance the image by adding HD effects, illumination, or give it a quick color fix. You can then add one of 13 different effects to change the look of the photo. You can also create a false focus or tilt shift effect, crop the photo, change the orientation, and fine tune the brightness and contrast. Tapping the Revisions button at the top of the editing screen and selecting “Original” can remove all changes.

You can share images in mass quantities by selecting them in the manner mentioned above and then selecting the “Share” button. This is an extremely useful feature because it makes it easy to send large groups of pictures to Facebook, Twitter or Instagram. You can also send images through iMessage or email. If you are sharing more than three photos, you can send them as a link instead of bogging down everyone’s Internet with giant email files.

Photoful is also connected to Sincerely so you can make postcards out of any of your photos with just a few taps. You can add a personal message and select an address from your contacts list and have the postcard sent out directly. 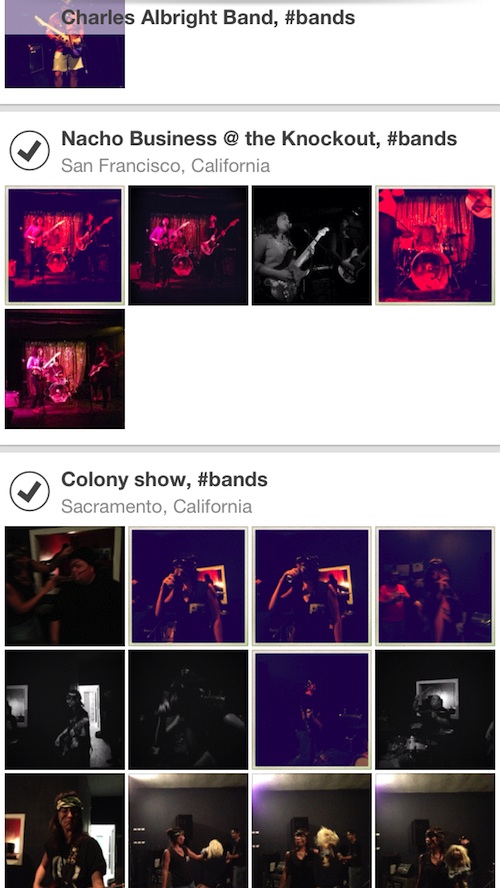 There are so many good things about this app that it is difficult to think of the best. My favorite features are the album organization, the tagging abilities, and easy selecting of multiple images. I especially like being able to send a link to someone through email of my pictures so that I don’t have to worry about how big the image files are.

[UPDATE] I was wrong about not being able to split or combine albums. Thanks to Jeff over at Photoful for showing me how to do it. In his own words, “When you select photos check out the ‘Move here’ and ,New album’ buttons that appear. With them, you can quickly split one day into two (or more) and combine multiple days in a snap.”

This app is available for free. It is highly valuable for iOS users that have more than 40 pictures in their camera roll. It is especially valuable for those of you who don’t plan on upgrading to iOS 7 this Fall.

Photoful is an excellent app that is well designed and offers many of the features that the current version of the native Photos app does not. Anyone not using iOS 7 should download this app if they are looking for a way to reorganize their massive amount of photos. That means most of you.