When Apple’s iTunes Store debuted on April 28, 2003, it launched with zero customers. Today, Apple has more than half a billion iTunes accounts. While not every account holder gives Apple his or her credit card details, most do. Therefore, it’s fairly safe to assume that Apple with its online-only content store is the biggest seller on the web.

Indeed, an analysis by Morgan Stanley reveals that not only is iTunes second only to Facebook’s one billion accounts, it also makes more money per account than Amazon. More interesting factoids follow…

Morgan Stanley analyst Katy Huberty shared (via AppleInsider) interesting charts showing just how far ahead iTunes is in terms of revenue and user base.

As seen below, second-ranked Amazon has about 200 million active accounts. Yes, iTunes has more than double the accounts of Amazon.

Even though Facebook leads the pack with its nearly 1.1 billion user base, Apple grew its account base the fastest in 2012 (55 percent) whereas Facebook grew “only” 25 percent (Amazon: 22 percent). 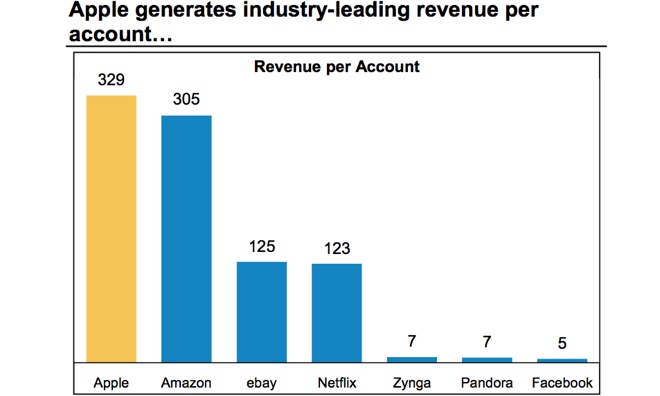 In terms of money, Apple in 2012 generated an average revenue of $329 per each Apple ID account versus $305 per each Amazon account and $125 and $123 for eBay and Netflix, respectively.

Don’t forget that Apple only sells a fraction of products compared to the likes of Amazon and eBay.

Moreover, iTunes is an online-only store which only sells low-margin digital content. In fact, although it keeps 30 percent of proceeds on digital downloads, Apple’s margins on apps are just two percent and one percent on music. 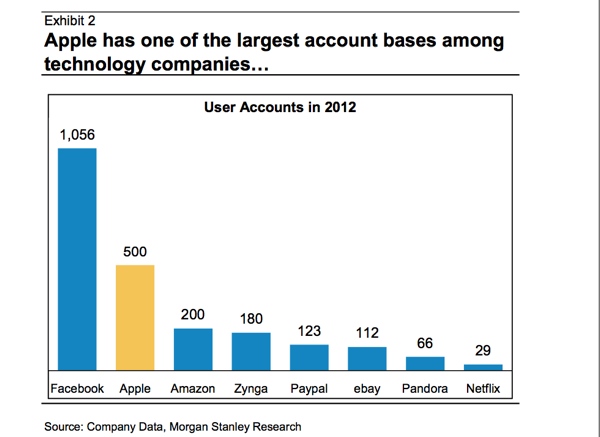 Huberty expects that Apple will reach 600 million active Apple ID accounts by the end of this year.

When asked what advice he could give to print die-hards, Steve Jobs quipped “price low and go for volume,” which is saying a lot considering Apple’s strength in selling the world’s content online.

No matter how you look at it, iTunes is Apple’s Trojan horse.

Each time it unveils a brand new device tied to the iTunes ecosystem, Apple leverages the hundreds of millions of existing users whose Apple ID account is enable for one-click purchasing.

And with a rumored iRadio streaming music service and an iPay mobile payment system, if anyone can mainstream music subscriptions and digital wallets, it’ll be Apple. The importance of the iTunes billing system can’t be overstated.

Think about it – you’ve already provided Apple with your billing information. If the next iPhone came with an NFC-enabled mbile payment solution, Apple could theoretically partner with retailers so you could authorize purchases at brick and mortar stores using your device tied to an Apple ID.