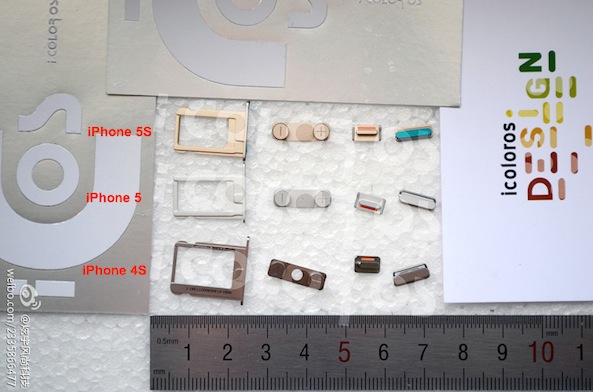 Although we won’t likely see a new iPhone at WWDC next week, it is on the way. The handset is reportedly scheduled to go into production this month, and is expected to be unveiled during a September or October event.

We know little about the device, believed to be the iPhone 5S, outside of the fact that it is going to look like its predecessor. We have seen a number of minor part leaks though, with a few more turning up this morning…

Earlier today, Nowhereelse.fr reposted these photos from iColorOS of what are believed to be iPhone 5S parts. There’s both a gold and silver-colored SIM card tray, and what appears to be volume, mute, and power buttons.

Some pundits think that the gold-colored SIM part may be confirmation of the theory that the next iPhone will come in a multitude of new colors. Multiple reports thus far have stated the device won’t come in just black and white.

While there’s no way to confirm these components belong to Apple’s next handset, it’s worth noting that Nowhereelse.fr does have a good track record with part leaks. And it says the same of iColor, so that obviously adds weight.

Also worth noting here is the fact that we have seen a gold SIM card tray before, in a similar context. Photos of gold and gray SIM card trays surfaced online back in April, with the poster claiming it belonged to Apple’s next handset.

Again, not much is really known about the so-called iPhone 5S at this point. Industry speculation suggests the device will feature the usual internal upgrades, as well as a better camera system and possibly a built-in fingerprint sensor. But we’ve seen little evidence of the claims.