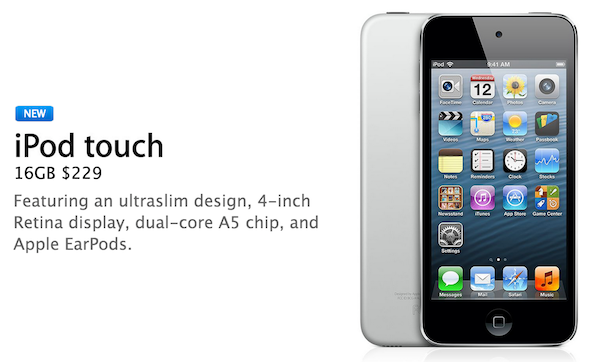 This is kind of interesting. Without cryptic event invites or rampant speculation, Apple just introduced a new product. No, it’s not the iWatch or anything like that. It’s just a new version of its fifth generation iPod touch.

As most of you know, Apple  unveiled the 5th-gen touch during its iPhone 5 event last fall. But up until now, it’s only been available in 32GB and 64GB. The new one comes with 16GB of storage, and few other changes…

As noted by The Verge, Apple has started listing 16GB late-gen iPod touch in its US web store tonight. It’s virtually identical to the other models with a 4-inch Retina display, dual-core A5 processor, and front-facing camera.

But it is missing some things. Most notably, there’s no rear-facing iSight camera. And it also appears to be missing the lanyard hook. Unfortunately, the lack of components doesn’t make it any thinner, as it’s still 6.1mm thick.

It does make it cheaper though. At $229, the 16GB iPod touch is about $70 less than its 32GB sibling. I’m not sure if that’s really worth losing the camera over, but if you’re interested, the 16GB is in stock and shipping immediately.

Will you be picking one up?