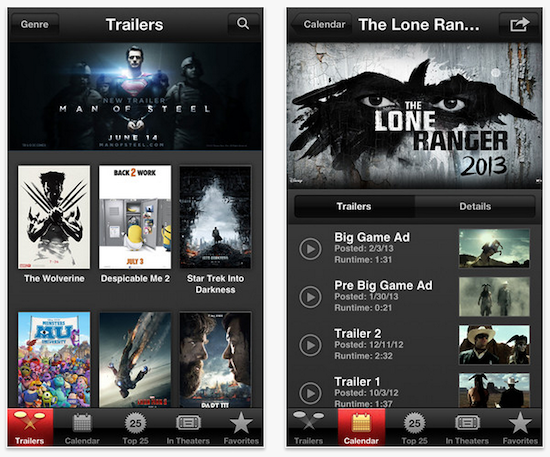 Apple hasn’t done much with iTunes Movie Trailers since it released it in late 2011. The app, much like Flickster, offers up movie previews, reviews, showtimes, and other useful information regarding feature films.

Today, however, it broke its silence and posted a significant update for Trailers. The release, which brings the app to version 1.2.3, includes several improvements like Fandango integration, better playback, and more…

This version of iTunes Movie Trailers provides the following improvements:

I’ve always been a fan of this app. It just feels like an Apple production. The graphics are gorgeous, and the app itself is fairly easy to navigate. It’s just always been light on features compared to some of the other app options.

That doesn’t necessarily change with today’s update, but I do like the improvements. And I really like the Fandango integration—tapping ‘Get Tickets’ now takes you into the ordering process in the Fandango app, if it’s there.

If you’d like to check out the latest version of iTunes Movie Trailers, you can find it in the App Store, for the both the iPhone and iPad, for free.