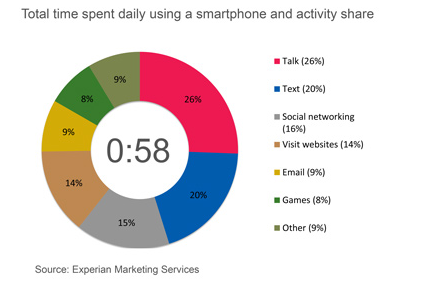 As the world migrates from dumb feature phones to more powerful smartphones, there are a greater number of options available beyond just talking and texting. What features are most used by smartphone owners and is the pattern different based on whether the handset is powered by Apple’s iOS or Google’s Android? To start, iPhone owners tend to spend more time with their smartphone compared to Android users, new marketing research indicates.

Smartphone users may constantly debate which operating system is supreme, but we see clear differences between the ways consumers use their phone depending on the operating system that runs in.

The most dramatic difference is that the iPhone is used an hour and 15 minutes per day while Android phones are used 49 minutes.

Overall, smartphone owners use their handsets for 58 minutes a day. 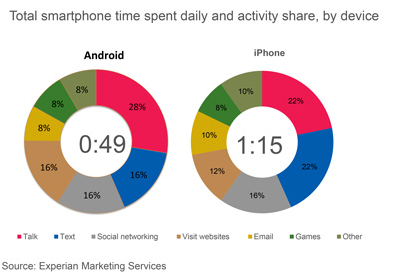 Owners of iPhones are more likely to text than talk, with Android users displaying the opposite daily usage pattern. Android owners talk on their smartphones for 28 percent of the daily activity, slightly above the 26 percent found in overall smartphone owners.

By contrast, iPhone users spend just 22 percent of the time, according to the research. There are other differences between how owners of the rival smartphone operating systems use their handsets daily.

While iPhone owners text 22 percent of the time, just 16 percent of the time is devoted texting on Android devices. Also, Android owners visit websites more often than iPhone users, while owners of Apple’s smartphone do more e-mailing from their phone.