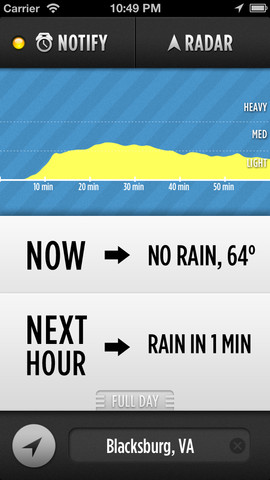 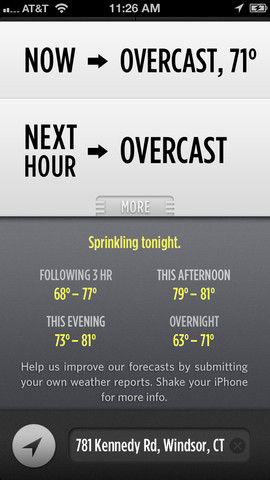 There’s something about weather apps. I don’t know if I’m enchanted more by the user interface innovations that mobile weather software brings to the table or by having weather forecast in the palm of my hand, but I just can’t get enough of those sleek little apps that now happen to occupy three dedicated ‘weather’ folders on my iPhone (yes, I need them all).

Dark Sky, for example, is captivating: its simplified user interface and beautiful, unobtrusive animations provide an at-a-glance overview of your local forecast and key weather metrics, up to an hour in advance.

In a major version 3.0 update, Dark Sky is now enabled in several new markets, including the U.K. and Ireland, can tell you weather farther than an hour away and lets you submit your own hyperlocal weather observations…

If standard precipitation is boring for you, you’ll love how intelligent text summaries in Dark Sky 3.0 describe the current conditions and upcoming weather in greater detail.

The team describes the tricks they use to deliver the most relevant weather information without cluttering up Dark Sky’s interface.

We’ve collected historical weather observations from tens of thousands of ground stations going back almost a century, and have used that data to figure out what “normal” conditions are for any time of day and any day of the year. When we identify that the current conditions aren’t normal, we’re able to roll that into our text summaries.

For example, most people don’t really care about things like wind speed and humidity unless it’s exceptional for their location. Using the historical data, we know what “exceptional” is for any time and place. Instead of simply saying “Clear” when it’s not raining, for example, we might say “Partly Cloudy and Humid”.

In addition to the United States, Hawaii, Alaska and Puerto Rico, the app now includes weather information for England, Scotland, Wales, Ireland and surrounding areas, thanks to the use of Forecast.io API, which is also work of the Dark Sky team.

Speaking of which, I’m guessing you by are aware of the awesome Forecast.io mobile web app, no? 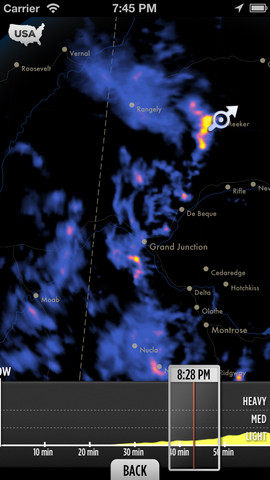 And when that won’t suffice, the new Personal Weather Reporter comes to the rescue.

After shaking your phone, up pops the Personal Weather Reporter form that lets you submit your own weather reports.

You can send stuff like the intensity and type of precipitation, the amount of cloud cover – even photographic evidence of your weather conditions.

Local weather reports crowdsourced from users may not make an immediate impact, but the team claims the data helps them make the forecasts even better going forward.

A universal app, Dark Sky will run you four bucks.

Today’s update, of course, is free for existing users.