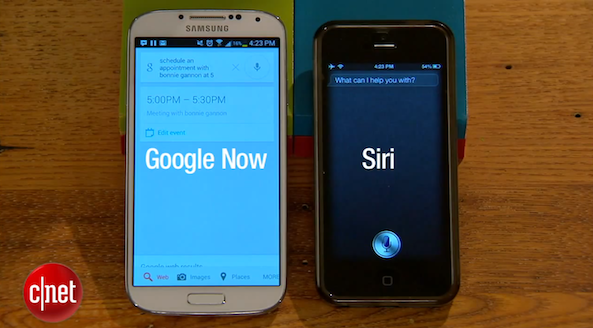 Siri was all the rage when Apple unveiled it alongside its iPhone 4S in the fall of 2011. The digital assistant was highlighted in a number of commercials for the handset during its 11-month life cycle. But since then, we’ve seen a number of competitors arise.

One of those competitors is Google Now, which launched in the summer of last year. And a lot of folks believe that it’s superior to Siri—both in speed and accuracy. But is that really the case? Find out in this new head-to-head comparison video of the two…

The folks over at CNET have pitted Siri and Google Now against each other in a live test. To make it as scientific as possible, the site says that both phones were disconnected from their mobile networks and have been connected to the same Wi-Fi network.

So what do you think? Which one is the better assistant? I would argue that, as stated in the video, both have their respective strengths. Google Now seems really good at finding information. But Siri is much better at productivity tasks, like setting appointments.

It’ll be interesting to watch these two products evolve over the next few years. Both Apple and Google are obviously investing a lot of time and resources into them, as well as into the idea that one day voice input will not just be a secondary input or a gimmick.

Apple, for its part, is expected to unveil new Siri features next month at WWDC, alongside iOS 7. Google held its developer’s conference last week, with no mention of any upcoming Now improvements, but it did just release an iOS version of the digital assistant.

What are your thoughts on the video?