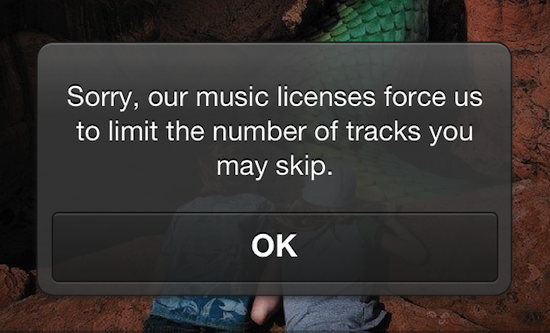 Industry chatter regarding ‘iRadio’ is really starting to pick up. Yesterday, a report surfaced claiming that Apple is struggling to reach deals with record labels because such a service has never been tried before. And today, we have even more details on the talks.

Citing sources with knowledge of the negotiations, CNET is reporting that the labels are actually very keen on Apple’s music service, but there’s a single issue keeping them from signing on the dotted line. Apparently, they can’t agree on song skipping terms…

“More specifically, Apple and Sony Music, the world’s second-largest music label, are still trying to hammer out details over how much Apple would pay for songs that people listen to a fraction of and then skip, according to people familiar with the negotiations. There could be other points of contention as well.

Apple’s streaming music service, which most closely resembles Internet radio leader Pandora, has some features built into it that give users added control, such as the ability to rewind a song and skip to the next after listening to a portion of it, sources say.”

The site goes on to say that the fact that skipping has become an issue is frustrating executives at the other labels, because they see the potential in Apple’s free radio service. Many of them believe it will be a boon for the music industry, and are eager to see it launch.

Rumor has it that Universal is the only record label on board with the service so far, but Apple is very close to reaching a deal with the Warner Music Group. That only gives the company a few weeks to reach terms with BMG and Sony before WWDC next month.

The last we heard, Apple was aiming for a summer launch, suggesting that we might see a mention of ‘iRadio’ at its World Wide Developer Conference. It’s hard to imagine it would want to wait until the fall to unveil it—especially now that Google is in the game.