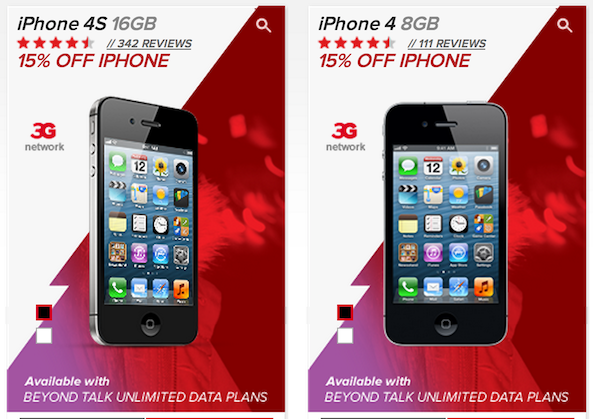 Apple is widely expected to unveil a new smartphone in the coming months, so it’s no surprise that we’re starting to see a flurry of specials on its older models. Verizon is knocking $100 off the iPhone 5, and T-Mobile will give you one for $0 with a trade-in.

In a similar fashion, prepaid carrier Virgin Mobile USA is hosting a promotion right now that will knock 15% off the price of the iPhone 4/4S. Now that may not seem like a very big discount, but it’s big enough to land you a no-contract iPhone for under $300…

In fact, analysts are calling for Apple to make a sub-$300 ‘budget’ iPhone to increase its marketshare. The company is currently missing out in markets like India and China, which are dominated by prepaid subscribers who have to pay full retail for its handsets.

And according to several reports, Apple has such a smartphone in its pipeline. But for those of you who can’t wait for the rumors to materialize, it might be worth checking out this deal from Virgin. It’s web exclusive, 2 per customer, and available for a limited time.