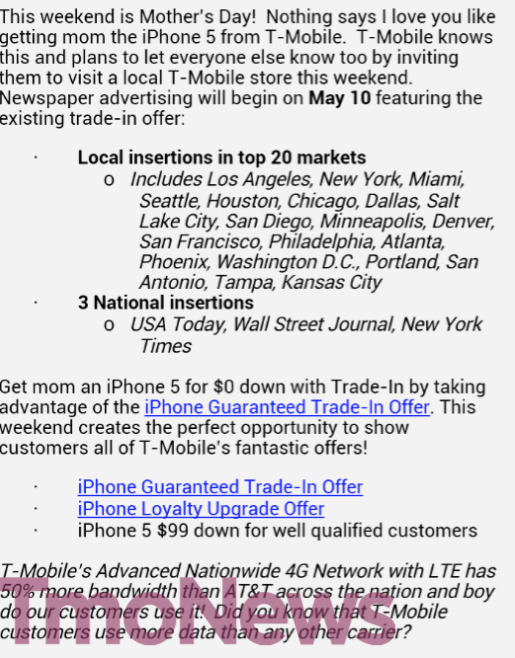 If you’re still looking for that perfect Mother’s Day gift, you might be interested to know that T-Mobile is going to be hosting a nice little sale this weekend in honor of the holiday. And it looks like the iPhone 5 is going to be one of its featured bargains.

According to a new report, the fourth largest US carrier is going to be offering the handset as part of a special trade-in deal. Customers will be able to score Apple’s flagship smartphone for $0 down, a savings of $100, with the trade-in of a valid mobile device…

“T-Mobile’s advertising for Mother’s Day weekend will focus heavily on the iPhone 5 and the trade-in promotion that has been ongoing since April 12th. That advertising itself will see three national newspaper insertions as well as papers in the top 20 markets.”

The promotion allows both new and existing qualified customers to trade-in an iPhone 4 or 4S for credit towards the down payment on an iPhone 5. And depending on the trade-in value of the device, they can also decrease their monthly payment from $20 to $15.

After going for years without an iPhone partnership, T-Mobile finally landed the popular handset last month. It’s offering the device on an unconventional purchase plan, where customers pay as little as $99 up front for an iPhone and $20 per month for two years.

And that’s just one of the major moves the carrier has made in recent months. It’s also introduced a new ‘UNcarrier’ campaign, with low-cost rate plans and no contracts, launched its LTE network, and as of last week, completed its acquisition of MetroPCS.

At any rate, if you’re interested in saving money on an iPhone 5, make sure you to check out your local T-Mobile this weekend. There’s no rush though, as the trade-in offer should be good through June 16.