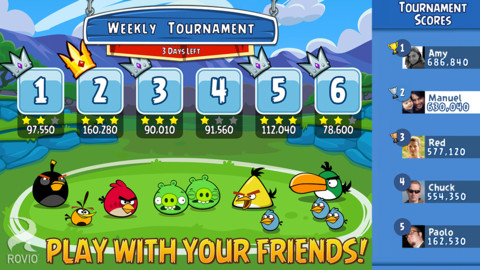 If you’re a fan of social gaming experiences, Angry Birds Friends will let you invite your Facebook friends to play, brag about your achievements by spamming your Facebook friends’ Newsfeed, spend cash on virtual gifts and coins, earn bronze, silver and gold trophies and more. I’ve included the launch trailer, screenies and more info after the break…

Billed as “the ultimate pig popper and bird flinger,” the game uses Facebook Connect to sync with the Facebook edition of Angry Birds Friends. This also means you won’t be able to play Angry Birds Friends without a Facebook account and an Internet connection.

Every Monday a different tournament gets under way, with all-new challenges for you and your friends. Use power-ups such as the King Sling, Super Seeds and Birdquake – or call in the Wingman to give you that winning edge on a new level.

And when it’s game time, play for that gold crown and then brag to your friends about your glorious victories. Plus you can celebrate your wins on Facebook and even share fun gifts.

In an effort to lure gamers into in-app purchases, Angry Birds Friends gives you free bird-coins just for completing the tutorial. 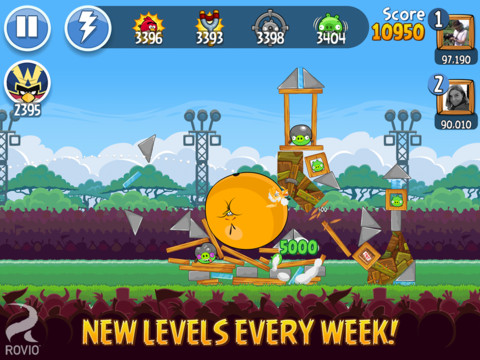 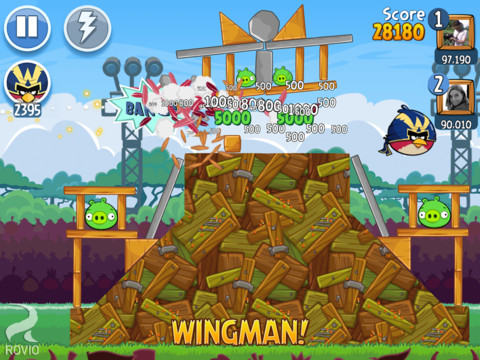 Angry Birds Friends is available free on the App Store as a universal binary running natively on iPhone, iPod touch and iPad devices. If you’re on Android, you can download the game from Google’s Play store.

On a related note, Rovio today announced that a new version of Angry Birds on Windows Phone is free until May 15, featuring over 400 levels and Xbox Live integration with new achievements and leaderboards.

Not sure about you, but I prefer solitary gaming experiences so I don’t think I’ll be playing this edition of Angry Birds with my friends.