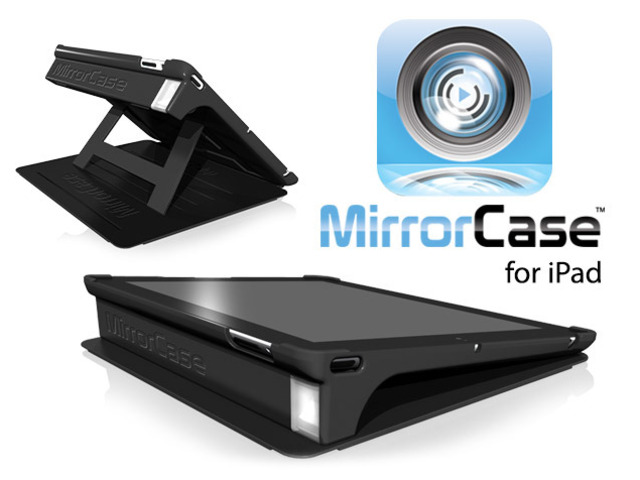 RHP Multimedia launched its MirrorCase for iPhone in May 2012. The iPhone 4/4S (a $49.95 value) and iPhone 5 case ($59.95 value) works with a free companion iOS app to let you take pictures and record video while continuing to use your device. It also doubles as an ergonomic shoulder rest for extended phone conversations. Today, the company on Kickstarter announced an iPad version of MirrorCase. What’s in it for you? Read on…

Designed specifically for the second, third and fourth-gen iPads, MirrorCase lets you keep your device in a horizontal position and shoot video while using your apps.

In order to achieve this, the case has an adjustable mirror protected by Gorilla Glass with an anti-reflective coating. You simply adjust the angle of the mirror to shoot video with the iPad’s rear camera while the device is rested horizontally.

It also has a kickstand with six different slots used to elevate the MirrorCase, soft rubber pads on the lid, an acoustic port to redirect sound toward the user during audio or video playback and a storage compartment for your stylus, pen or pencil.

The companion iPad app will take some of the design cues from Samsung’s Galaxy Note by letting you jot down notes or make annotations while watching a live, resizable preview of the video you’re shooting.

According to the blurb:

Unleash the power of the MirrorCase! Record video and take notes or make annotations simultaneously. Share notes synced with your video to other MirrorCase App users.

This could come especially in handy for lectures and business presentations, when one may want to record a video of the meeting while taking notes and using other apps at the same time. 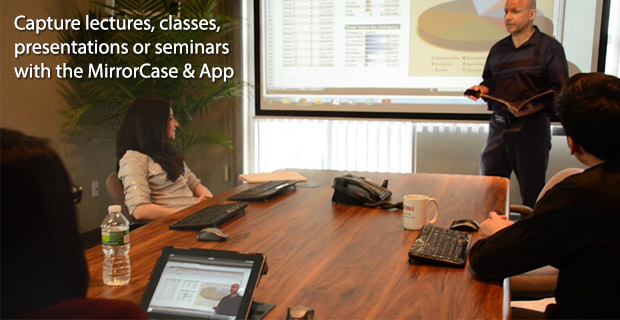 Other software capabilities will include support for PDFs, Dropbox integration, custom video settings and more.

The MirrorCase for iPad can be yours in exchange for fifty bucks.

Shipments are expected to start in August.