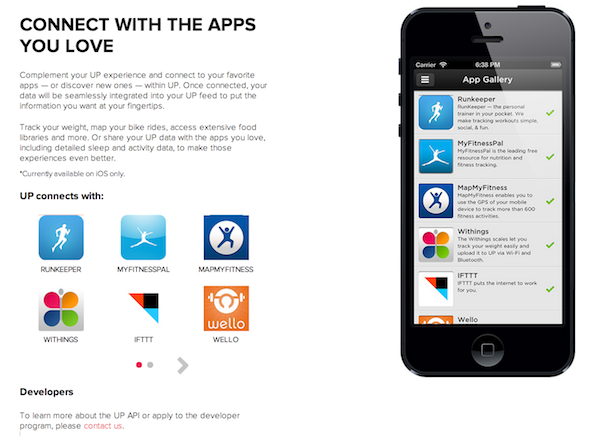 Jawbone, a company well-known for its bluetooth headsets and speakers, ventured into the world of fitness accessories last year with its UP bracelet. Well I should say re-entered. That was its second attempt with the UP, after hitting early manufacturing issues.

Today, reviews of the UP still seem to be a mixed bag, but Jawbone is looking to sweeten the deal with third party app support. Earlier today, the company unveiled its new ‘UP Platform,’ which it says will allow developers to integrate UP data into their apps…

“Jawbone today announced its UP Platform for iOS and unveiled 10 apps that have integrated with UP, the wristband and app system that helps you know yourself so that you can make smarter choices and feel your best. Jawbone also announced it will soon open the API for others to integrate services with UP or build entirely new experiences.”

The UP platform will have just 10 or so app partners at launch, but with Jawbone gearing up to open up the API to other developers, that should change rather quickly. Launch partners include MyFitenssPal, RunKeeper and Withings. Here’s more from the release:

-Log a run or bike ride with RunKeeper or MapMyFitness, and view your workout data in UP, including maps of your route, to see how last night’s sleep may have impacted your speed or distance.
-Step on your Withings Smart Body Analyzer and automatically import your weight into UP to track it in the context of how you sleep, eat and move, and get support from your UP teammates as you work toward your goal.
-Create IFTTT Recipes to receive nudges based on your UP activity, like texting you to go for a run if the weather is sunny, or tweeting at your workout partner when you reach 15,000 steps.
-Complete a workout with a live personal trainer in your home or hotel room using Wello, and log the workout directly into UP.

But that’s not the only big announcement Jawbone had for today. News also broke of the San Francisco-based company acquiring BodyMedia, for more than $100 million. The health tracking startup has over 300 issued and pending patents related to fitness and electronics.

It just goes to show you how serious this space is quickly becoming. The competition between Nike, Fitbit and Jawbone is already tough. But with pretty much everyone in the tech world—including Apple—eying the wearable accessory market, we haven’t seen anything yet.

What do you make of all this? Do you think Jawbone is making the right moves?