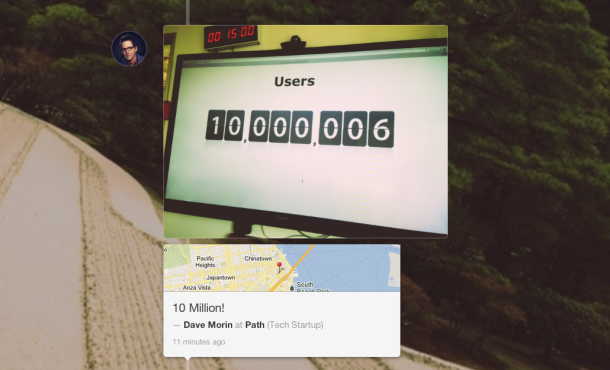 Last month, I downloaded Path for iOS for the third time to try out the app’s new 3.0 update, and I thought to myself “this app is so beautiful.” It’s just too bad that no one I know uses the decidedly more intimate social network.

But just because no one I know uses it, doesn’t mean that no one is using it. Dave Morin, the company’s founder and CEO, announced earlier today that Path has just crossed a major milestone in its short life: 10 million users…

Morin, a former employee of Apple and Facebook, launched Path in the fall of 2010. And since then it’s undergone a significant relaunch, turned down a $100 million offer from Google, and endured a major privacy scandal.

But it’s pushed past all of the trials and tribulations, and Morin told The Wall Street Journal last week that the network is now adding more than a million users per week, and has been given a valuation just north of $250 million.

For those who aren’t familiar with Path, its users can upload photos, tag other users and checkin places, and are limited to just 150 friends and family. Check it out on the web, or through one of its native clients on Android or iOS.