Most folks are in agreement that Apple revolutionized the digital music industry, and the music industry as a whole, when it launched its iTunes store in April of 2003. At the time, there was no other service offering easy access to digital tracks for $0.99.

And I would argue that it did the same thing for digital movies and TV shows when it added them to iTunes in 2005 and 2006. No one came close to what Apple was doing in the space back then. And judging by the latest numbers, that still holds true today…

NPD is out with a new report today (via MacRumors) regarding the U.S. online digital video market for 2012. And according to its data, Apple still holds a commanding lead over Amazon’s Instant Video, Microsoft’s Xbox Video service and other competitors.

Looking at purchased video content, the numbers show that Apple has a staggering 67% of the TV show market and 65% of the movie market, with Xbox and Amazon coming in a distant second at around 10% each. And everyone else splits the remaining 16%. 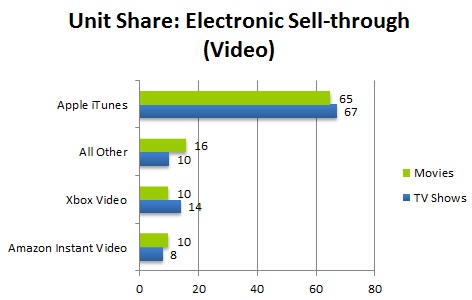 The race is a little closer in the digital rental space, but Apple is still dominating it with 45% of the market. Amazon again takes second place with 18% marketshare, and believe it or not Walmart’s VUDU service beats on Xbox Video at 15% and 14% respectively. 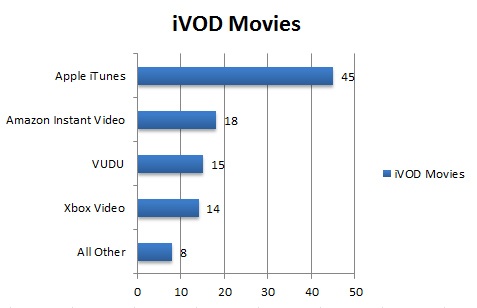 I’m having a hard time trying to figure out why Apple is still so successful here. I mean, it’s not like their prices are any cheaper than the other services. And it’s not like other products like Amazon Instant Video aren’t available on a number of electronic devices.

Perhaps it’s simply the fact that it got to the space first:

“Apple has successfully leveraged its first-mover advantage and of iTunes, iOS and the popularity of iPhone and iPad to dominate the digital sale and rental markets for movies and music,” said Russ Crupnick, senior vice president of industry analysis at NPD. “While worthy competitors have come along, no other retailer has so thoroughly dominated its core entertainment product categories for so long.”

Keep in mind, this data doesn’t include streaming video services like Netflix, which just had a monster quarter. In fact, with rumors growing that Apple is looking to hedge its iTunes bet with streaming music, I wouldn’t be surprised to see it make a similar move in video.

Which service do you use to rent/buy movies online?